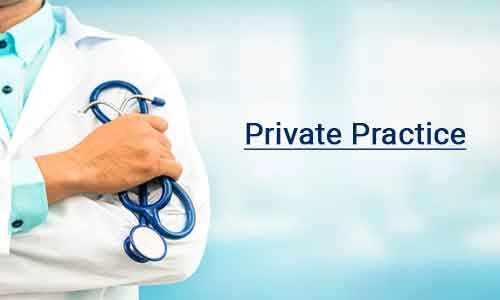 “Doctors spend most of their time in private clinics and are not available for patients in government hospitals. Their attention and time is directed towards their private clinics,” he said.

The DAK President said patients in government hospitals are left to the mercy of trainees who lack expertise to handle complicated cases and some patients even die of misdiagnosis or delayed intervention due to non-availability of senior doctors who most of the times are in their private clinics.

He said doctors use public hospitals as recruiting grounds for their private practice and orchestrate scenarios to generate business for their clinics.

“The dual practice creates pervasive incentives for doctors to increase waiting time in government hospitals so that patients are forced to go to private hospitals,” said Dr Hassan.

“Doctors misuse hospital facilities for their private patients at the cost of poor patients who have no resources to attend private clinics,” he added.

General Secretary DAK Dr Arshad Ali said private practice has hollowed our health institutions which not only are crucial life-saving assets, but also full-time centers for medical education and research.

“It is ironic that full-time government doctors are allowed to run private hospitals depriving poor and underprivileged of essential healthcare,” he said.

Vice-President DAK Dr Mir Mohd Iqbal said the previous attempts to ban private practice have been stalled by a strong lobby and they have misled previous regimens on the issue.

“There is no provision for private practice of doctors working in teaching hospitals as they have a huge responsibility of patient care, teaching and research,” he said.

“If the present dispensation is serious to revive the health sector and mitigate the sufferings of poor people, it should immediately ban the private practice by government doctors particularly those posted in medical colleges,” said Dr Javid Qanangoo senior executive member DAK.( KINS)

JKP on forefront to make its people safe and secure: ADGP Jammu