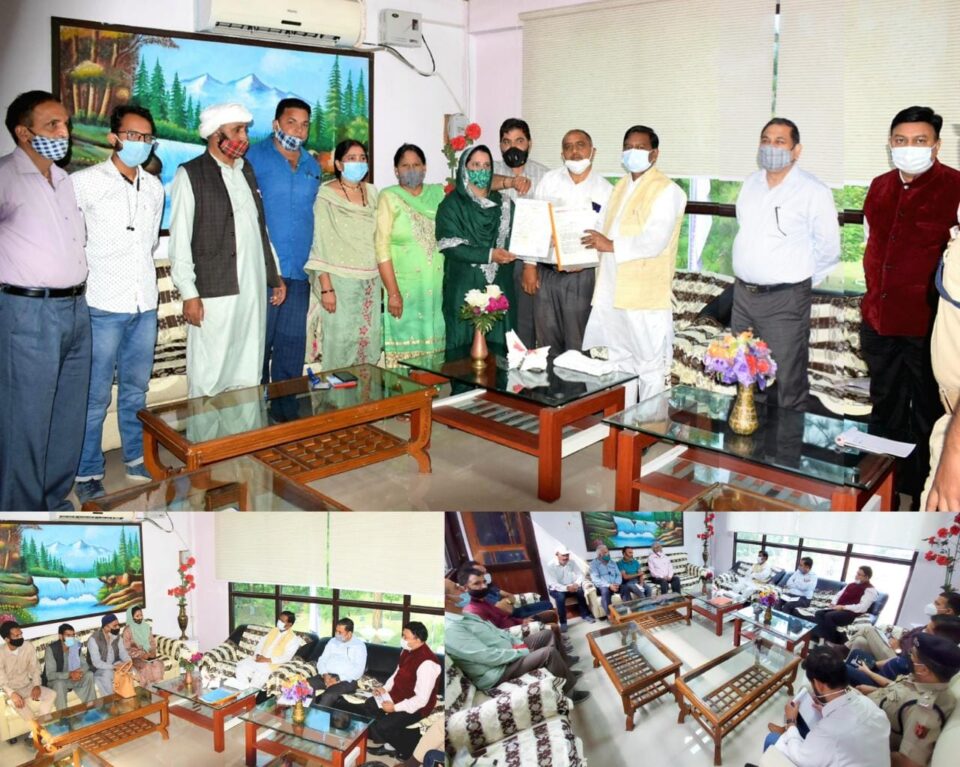 KISHTWAR, SEPT  27 ( KINS): Union Minister of State for Jal Shakti and Tribal Affairs, Shri Bishweswar Tudu who was on a 3 day visit to district Kishtwar as a part of Union govt’s Public outreach programme today concluded his tour today.

On the last day of his visit, he interacted with PRI members and discussed various issues, listened to their grievances besides taking stock of functioning of Jal Shakti Department.

During his interaction with the delegation of PRI members he urged them all to act as a bridge between people and administration in the grievance redressal mechanism.

He stressed on them to work in tandem with the local administration in the effective and efficient implementation of developmental schemes and projects.

While interacting with the delegation of schedule tribes, he listened to number of issues pertaining to the effective implementation of welfare schemes meant for the socio economic upliftment of the schedule tribes.

He mentioned that the Central Government has launched a number of welfare schemes for tribal sections of society which shall ensure upliftment of these downtrodden sections and the only need of the hour is to aware the stakeholders about these schemes.

Later, delegations of political parties and contractors called on the Minister and apprised him of various bottlenecks in the path of implementation of various development projects in the district.

The Minister listened to their issues patiently and assured for the early redressal of these grievances and assured that he will take up their genuine issues with the Central and Local government.

Reiterating the initiative taken by Central and UT Govt to secure the livelihood of youths and women under the banner of livelihood mission, he urged that youth should avail these schemes by coming forward and registering themselves with concerned government departments.

The delegations complemented the Minister for visiting the area  and inaugurating the developmental works besides giving patient hearing to their grievances.

Earlier, the Union Minister chaired a meeting with the Jal Shakti Department and reviewed it’s functioning and progress. In the meeting, threadbare discussion on various issues pertaining to rationalisation of water supply in district were held. The authorities were directed to repair the hand pumps to augment the water supply system in district on immediate basis untill the Jal Jeevan mission is fully implemented in the district.

The Minister stressed on the executive agencies to expedite the progress on the civil works of prestigious Naigarh water supply scheme and stressed to ensure that the underground and over–head water reservoirs are completed in stipulated time so that adequate water supply is ensured in town and adjoining areas.

Besides, he directed the Jal Shakti department to take care of repair and maintenance of the pipelines to avoid irregularities in distribution of water.

Furthermore, the Minister directed the authorities of Jal Shakti Department to ensure the 100 percent coverage of each household by tap water by 2022 under Jal Jeevan Mission.( KINS)