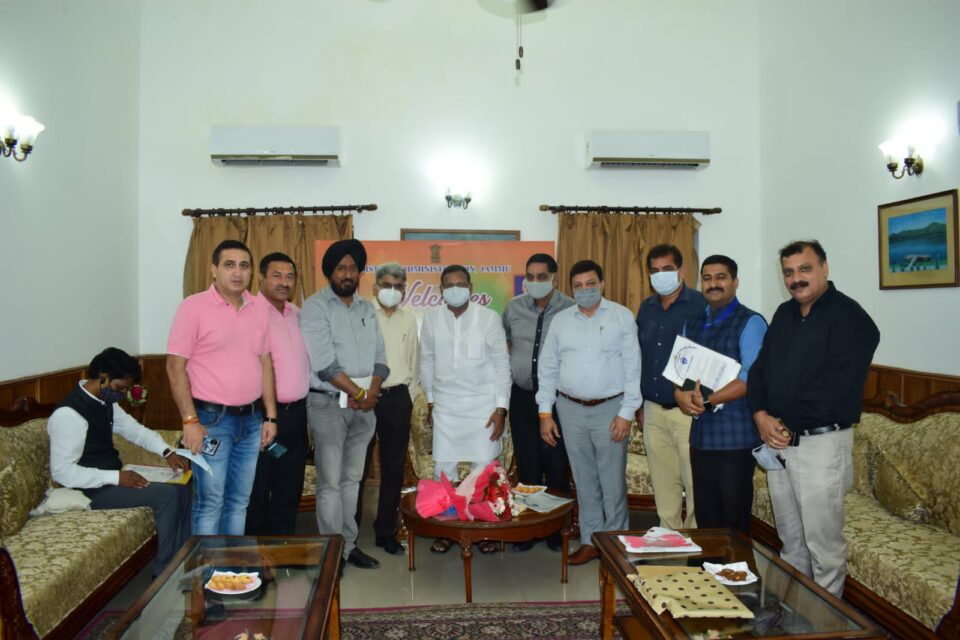 Jammu , Sept 28 ( KINS) Chamber of Commerce and Industries (CCI) Jammu delegation met the Union MoS Finance, Pankaj Choudhary in Jammu and submitted a memorandum of demands pertaining to the trade and industry sector of Jammu Province to the Union Minister.
At the outset the delegation led by the Chamber President Arun Gupta thanked the Minister for providing them an opportunity to interact with him to convey their issues and problems. This was followed by discussions and deliberations on some of the pressing demands and fruitful suggestions with the MoS Finance, during which the Chamber President explained in detail to him how certain steps taken by the Union Govt can drastically boost the economy of this region in an unprecedented way besides creating a huge potential for employment of the unemployed youth in this Union Territory especially in Jammu.
Arun Gupta informed the MoS Finance that Chamber of Commerce and Industries Jammu is an apex body of Trade and Industry in this part of the Union Territory and it would like to highlight some significant issues pertaining to the traders and industrialists of the region.
Arun Gupta said that there is a dire need for establishing new Public Sector Undertakings in Jammu Province and in this regard the industries of Railway and Defence sectors are the best options. Just like other states of the nation the units of the aforesaid industries should be established by the Central Government here as it will undoubtedly generate huge employment opportunities for the youth of the State besides giving a fillip to the UT’s economy.
The Jammu Chamber also sought refund of SGST to industrial units of UT of J&K despite the assurance give by the then Finance Minister of J&K that the SGST refund will be made within one month to the Industrial Units but till date nothing has been done in this regard.
Besides, Chamber President also demanded the benefits of New Industrial Policy including the benefit of GST should also be given to existing Industrial Units of Jammu region. 25 per cent share of New Industrial Policy should be reserved for the stake holders of Jammu Province as there are lakhs of unemployed youth in Jammu, he added.
Jammu Chamber has also expressed resentment over the proposal of big companies like Reliance to open stores in Jammu in the retail sector, saying that if this happens then small shopkeepers of Jammu will be ruined and their shops will be closed.
Meanwhile while welcoming the decision of the Govt to start beating retreat at Suchetgarh border; the delegation members said that this would definitely increase the tourist footfall in the region. The Chamber President said that  there is a huge tourist potential in Jammu Province which needs to be exploited to boost the economy of the region. He said Peer Panchal mountainous region, besides the areas of Bhaderwah, Bani, Kishtwar and Doda despite having vast tourism potential need to be brought on the Tourism map to exploit the potential fully and boost the economy.
The Chamber has also discusses these issues comprising clarity on land policy, Labour Policy, Redefining of Land Types, Durbar Move , rehabilitation policy, completion of Pending ongoing Projects, delay in payment to contractors, issue of wine traders, sand mining, Crushers and brick kiln trade etc with the Union Minister.
The Union Minister assured to consider the demands and suggestions put forth by CCI and thereafter take the requisite measures in this direction.
Other Office Bearers who accompanied the delegation include Anil Gupta, Sr. Vice President, Rajeev Gupta, Jr. Vice President, Gaurav Gupta, Secretary General,  Rajesh Gupta, Secretary and Rajesh Gupta, Treasurer ( KINS)
previous post

Eye on polls, J&K restores security of ‘hundreds’ of netas