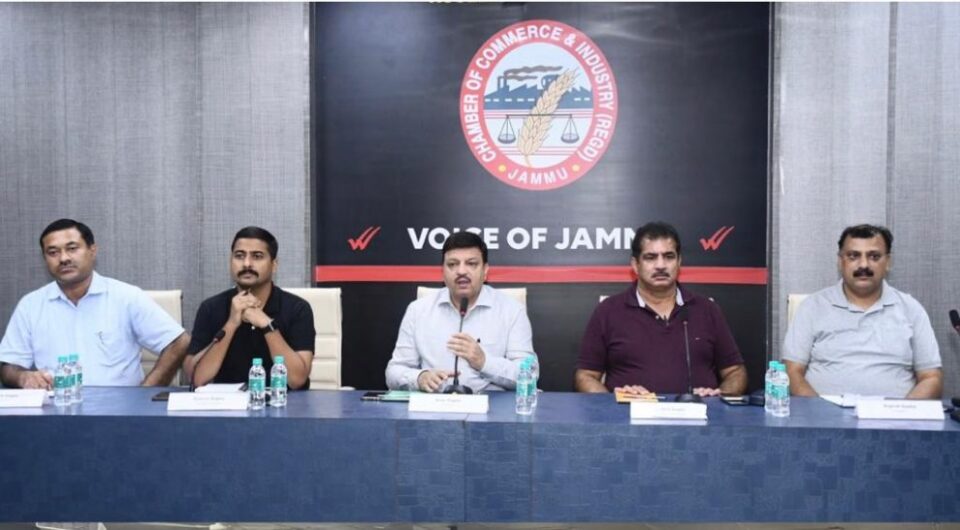 JAMMU, Sept 29 ( KINS): With no response from the Union Territory administration even over a week after complete shutdown of business establishments, the Jammu Chamber of Commerce and Industry today warned the government of intensifying agitation if the demands were met at the earliest.

Flagging a series of issues including reported licenses to reliance retail for venturing in Jammu markets, new liquor and mining policies and suspension of Darbar Move, the business community in had observed a day-long shutdown on September 22.

Even as the shutdown was nearly complete and the demands got overwhelming political support from all parties except the BJP, the Government has yet to respond to the concerns of business community.

Corporate behemoth Reliance’s retail arm had on September 21 issued a cryptic statement in which it disputed 100 as the number of retail outlets being set up by the company in Jammu but it didn’t deny venturing in the local market. Meanwhile, demands have started coming up from rural side of the Jammu region inviting the Reliance retail to set up their stores in Poonch and Rajouri.

Two days after the shutdown, the Lieutenant Governor made it clear that there was no going back on the Darbar Move decision. Speaking to reporters on the sidelines of an event in Jammu, he said, “Darbar Move was a nexus and a huge loss to the public exchequer”.

Since rather than reaching out, the government has indicated that it is not inclined to go back on any of its policies, the Jammu business community is in a quandary.

After a meeting held in Jammu on Wednesday, the Chamber of Commerce and Industry has “urged the government not to test patience of traders and asserted that Chamber will continue its fight for cause of Jammu Province till it reaches the final conclusion”.

A statement of the Chamber said, “to intensify the movement was voiced in unison during a meeting of the Chamber of Commerce and Industries held here today under the chairmanship of Arun Gupta, President CCI Jammu”.

“It is pertinent to mention here that the meeting was held in connection with the multifarious demands of the people of Jammu province for which a complete Jammu Bandh supported by various organizations was observed on 22nd Sep on the call of CCI”.

“Today’s meeting was attended by members of various traders’ and other associations to discuss future course of action after the aforesaid successful Jammu Bandh”.

“During the meeting various burning issues presently confronted by the business fraternity were deliberated at length besides discussing the means to be adopted in order to get these issues resolved”.

Arun Gupta, while reiterating gratitude to various organizations for making the Sep 22 Bandh successful, urged the government to consider the demands raised by it at the earliest.

He said that all the demands raised by the Chamber pertaining to various sections of the society across Jammu Province are quite genuine and there is no reason for the government to turn blind eye to the aspirations of people of this province.

The Chamber President asserted that Chamber will continue to fight for cause of Jammu Province till this significant battle for genuine rights reaches a logical conclusion.

He vowed that Jammu Chamber will continue to work relentlessly for ensuring that justice is secured for the people of this province especially the traders and industrialists fraternity and will further intensify its movement by even resorting to long term agitation in case the Govt fails to accept their demands at the earliest.