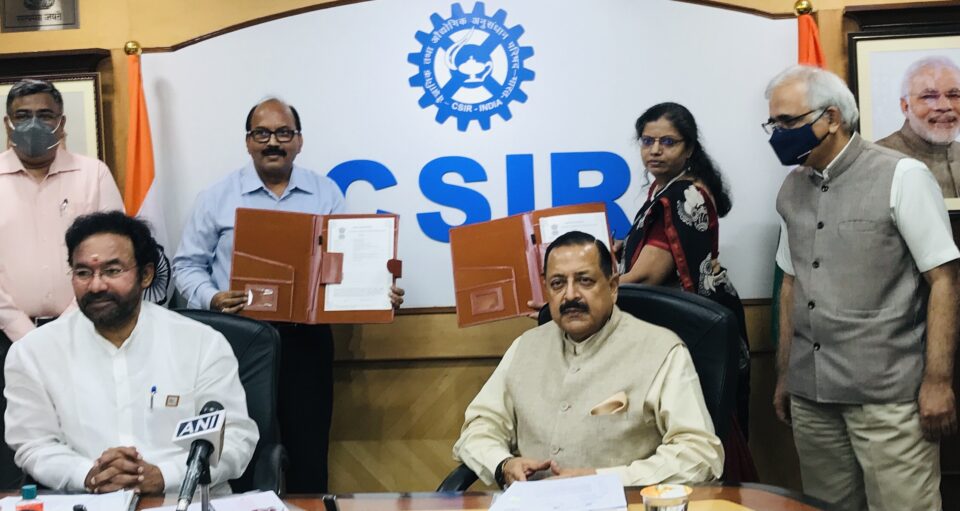 NEW DELHI, Sept 29 ( KINS) : Union Minister of State (Independent Charge) Science & Technology; Minister of State (Independent Charge) Earth Sciences; MoS PMO, Personnel, Public Grievances, Pensions, Atomic Energy and Space, Dr Jitendra Singh today said that the Government will be setting up Science Museums across the country to promote scientific temper, particularly among children and the younger generation.
Dr Jitendra Singh was speaking after signing of a MoU between Council of Scientific and Industrial Research (CSIR) and National Council of Science Museums (NCSM) in the presence of G. Kishan Reddy, Union Minister of Culture, Tourism and DoNER. The MoU aims at setting up Science Museums at select CSIR Laboratories to promote scientific curiosity and awareness among the common people across all sections of society.

Dr Jitendra Singh called for imbibing scientific thinking to face the challenges of 21st Century. He said, the recent pandemic has emphasized the importance of increasing awareness of society for science and scientific thinking. He called for imbibing scientific thinking to face the challenges of the 21st Century. He said, the recent pandemic has emphasized the importance of increasing awareness of society for science and scientific thinking.
Referring to the recent address of Prime Minister Narendra Modi at the 76th United National General Assembly in New York, wherein Modi pointed to the threat of regressive thinking and extremism faced by the world, Dr Jitendra Singh reiterated that science-based, rational and progressive thinking should form the basis for development and in order to strengthen a science-based approach, India is promoting experience-based learning.
The Minister said that today’s MoU is a step in this direction and will create a new chapter in the history of science communication and dissemination. He said, it is a matter of pride also as this is happening at the opportune time when the nation is celebrating the Azadi ka Amrit Mahotsav to mark 75 years of India’s independence.
Dr Jitendra Singh said, the new initiative of CSIR in setting up Virtual Labs in partnership with IIT-Bombay for school students as desired by the Prime Minister in the CSIR Society Meeting in 2020 is highly laudable. He also welcomed the move by CSIR and NCSM to set up a museum within NPL to showcase the technologies and interventions developed by CSIR over the past eight decades.
The Minister said, this initiative is also in line with the vision of PM Narendra Modi, who desired that S&T must reach every nook and corner of the country and that there is a need for outreach. He said, museums should not be static but must be dynamic, engaging and should emerge as crucibles of innovation and we must tap into the curiosity and enthusiasm in the students and the youth.
Dr Jitendra Singh said, while CSIR has tied up with Kendriya Vidyalayas and Navodaya Vidyalayas and Atal Tinkering Labs Schools of Niti Aayog, it must reach out to the remote areas and schools. He said, use of digital means and the virtual labs of CSIR and the mobile science museums of NCSM will be very complementary and valuable.
In his address G. Kishan Reddy said that “Globally, it is recognized that Science Centres play an important role in supplementing the science education in the country and creating a culture of science and technology and developing scientific temper amongst the masses and youth in particular”. He also highlighted the fact that it is also the vision of our Prime minister, who said that students have to move forward with the ‘skills of the 21st century, which he quoted as 5Cs of 21st Century. They are critical thinking, creativity, collaboration, curiosity and communication.
Reddy said, the signing of this MoU will connect NCSM and CSIR and its laboratories significantly in fulfilling their objectives and the vision of our prime minister in a more fruitful manner. He also assured all the help and assistance from the Ministry in successfully implementing this initiative.
He also suggested that there is also a need to have synergy and collaboration between other such departments in the Government of India whose aim is also to promote a culture of science, technology and Innovation in the country.( KINS)

LG may inaugurate ‘Retreat Ceremony’ at Suchetgarh on Oct 2

Kashmir tense as nobody says what is going to happen