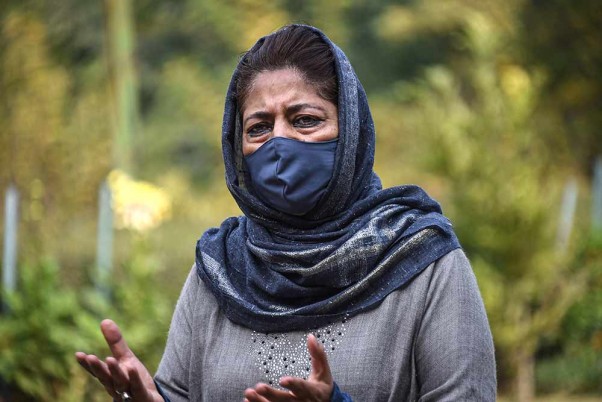 Srinagar, Sept 29 ( KINS): Former J&K Chief Minister Mehbooba Mufti tweeted Wednesday to say she had been stopped from leaving her residence because a security forces vehicle had been parked outside the main gate of residence on Srinagar’s Gupkar Road.

This is the second time in three weeks the PDP chief has claimed to be in “house detention”. She said she had wanted to visit J&K’s Tral area, where security forces allegedly ransacked homes.

“Locked up in my house today yet again for attempting to visit the village in Tral allegedly ransacked by army. This is the real picture of Kashmir that visiting dignitaries must be shown instead of GOI’s sanitised & guided picnic tours,” Ms Mufti tweeted this morning.

She attached a photo of an armoured CRPF, or Central Reserve Police Force, truck parked outside her gate, with green security barricades also visible.Yesterday she tweeted alleging that members from an Army camp in Tral had “ransacked homes and ruthlessly thrashed a family”. Ms Mufti said the daughter of the family had been seriously injured.

“Army from Yagwani camp in Tral ransacked homes & ruthlessly thrashed a family last night. The daughter, owing to her serious injuries, was admitted to hospital. Not the first time that civilians from this village have been beaten up by army in this area,” she posted.( KINS)

Improvement in weather conditions across J&K from today: Weatherman