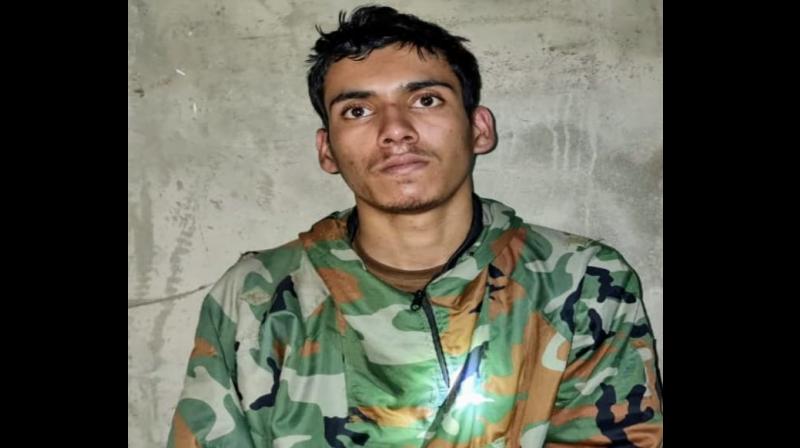 New Delhi/Srinagar ( KINS): Ali Babar Patra, a Pakistani militant nabbed along the Line of Control in Jammu and Kashmir’s Uri sector earlier this week, has exposed Islamabad’s role in a brief conversation with the media.

Patra told the media that he was trained by Pakistan’s spy agency, Inter-Services Intelligence as well as the Pakistan Army, along with the Lashkar-e-Toiba militant group. The training was conducted in Pakistan.

Exposing Pakistan’s role once again in carrying out militant activities in India, Patra said he was given around Rs 50,000 for joining the militant group. The Pakistani national said post his father’s death, he had no option left but to join terrorism due to poverty. Patra earlier used to work at a cloth factory. His family consists of his widowed mother and an adopted sister.

The militant said he had met a terror handler and was taken to the LeT camp in 2019. He was trained again before being made to cross the Line of Control.

At LoC, Patra’s mind changed when he saw the body of fellow LeT operative, Anas. Patra thought that he will also die like Anas and decided to leave and give up the arms. Patra said he sent a message to his mother from the LoC and told her that he had made a mistake by crossing over to the Indian side of LoC and wanted to return.

Patra said the firing at the LoC left him disturbed. Four other militants, who were part of the group of infiltrators, managed to rush back to the Pakistani side but Patra and Anas had crossed over by the time Indian Army started its operation and they couldn’t go back due to the tight cordon. When the Indian Army established contact with them a few days later, Anas was killed in the operation and Patra told the Indian Army that he wanted to surrender.

The militant has now given his mother’s phone number to the Indian Army and shared all details of his training and the operation with the Indian Army.

It may be recalled that the Army operation at Uri had lasted for nearly 10 days, in which one militant was shot dead (Atiq ur Rehman alias Qari Anas) while another surrendered (Ali Babar Patra).

The Army had at a press conference informed that Parta is a resident of Dipalpur, District Okara in Punjab, Pakistan. Anas, on the other hand, hailed from District Attock in Punjab.

According to the Army, the group of six militants had attempted infiltration along the LoC in Uri Sector on the intervening night of September 18 and 19. Four of them had managed to ran back towards the Pakistani side while the remaining two entered the Indian territory upon being challenged by an Indian Army patrol party.

Reinforcements were brought in and on September 25 night, one patrol managed to establish contact with the two militants.( KINS)

LG may inaugurate ‘Retreat Ceremony’ at Suchetgarh on Oct 2

171 militants including 19 from Pakistan killed in 2021: IGP Vijay Kumar

Those Against Scrapping Art 370 Will Be Beaten With Shoes: J&K Guv