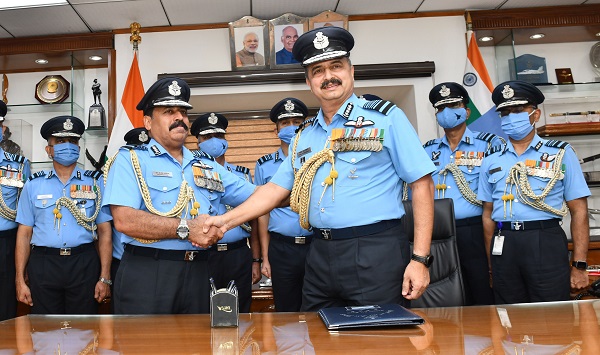 New Delhi, Sept 30  ( KINS): Ace fighter pilot Air Chief Marshal Vivek Ram Chaudhari who was in charge of the Ladakh sector during the peak of the crisis with China, took over as the Chief of Air Staff from Air Chief Marshal RKS Bhadauria on Thursday.

Bhadauria superannuated after 42 years of service and was architect of two mega fighter aircraft deals including 36 Rafales and 83 Mark1A indigenous Tejas jets.

Chaudhari, who has served in various important capacities at both field formations and air headquarters, would be taking over the force at a time when the country is still in a standoff position at the borders with China and tensions in the region are high due to the situation in Afghanistan.

Chaudhari would also be responsible for the operationalisation of modern air defence systems like the S-400 from Russia, which are going to be inducted soon.

Chaudhari, whose son is a Rafale fighter aircraft pilot, also ensured the smooth induction of the Rafales into the Indian Air Force as the Ambala airbase was under him as Western Air Commander.

After joining the fighter stream of the IAF in December 1982, he has a flying experience of more than 3,800 hours on a wide variety of fighter and trainer aircraft, including missions flown during Operation Meghdoot, the Air Force’s support to capture Siachen glacier in the 1980s, and Operation Safed Sagar (the support provided by the IAF during the Kargil conflict in 1999).

An alumnus of the National Defence Academy and Defence Services Staff College, Wellington, Chaudhari has commanded a frontline fighter squadron and a fighter base during his career. He has also held various other positions including the Deputy Commandant, Air Force Academy; Assistant Chief of Air Staff Operations (Air Defence) and Assistant Chief of Air Staff (Personnel Officers) ( KINS)

Jail Superintendent branded Om on my back: Tihar undertrial

Imagine how escalated situation must be: Omar on killing of Indian soldiers by Chinese army