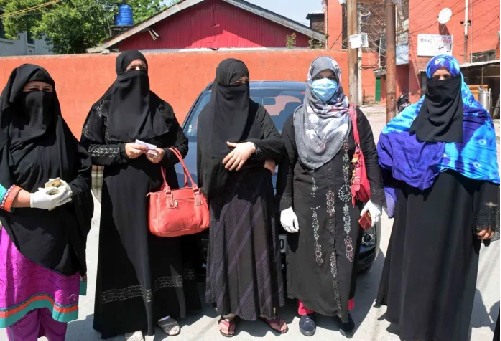 “After some time, my husband started beating up me. Then in 2020, he divorced me. When my father got to know, he could not bear the shock and died of a heart attack,” she told news agency Kashmir Indepth News Service (KINS).

At present Nusrat lives with her two daughters in a rented room in North Kashmir.

“I had never expected I would be stuck here. It seems no one is bothered about our plight here,” she regretted, who is earning by tailoring to feed herself and her two daughters.

Nusrat is one among the 371 Pakistani brides who have married to Kashmiri men. Among these most had crossed to Pakistan for arms training.

In 2010, the then Omar Abdullah-government introduced a “rehabilitation scheme” for those who had crossed the line of control between 1989 and 2009. Under the amnesty, former militants could return to Kashmir and be united with their families, provided they had “given up insurgent activities due to a change of heart and are willing to return to the state”.

However for these Pakistani brides, the scheme did not provide them any relief. They have been demanding either be deported to Pakistan or given citizenship so they get passport and travel legally to Pakistan.

Similarly, Ambreen Rehman, 32, from Muzafarrabad married to a former militant from Kupwara in 2002.  In 2013, she came to Kashmir and since then never been to Pakistan.

“After coming here, my husband took away my passport. I am still living with my husband and my children but want to see my family in Pakistan,” she said in a visibly upset tone.

She could not see the last glimpse of her father when he died in 2019. “Our children have no future here and are labeled as children of ex-militants. They can’t get a government job or won’t be allowed to go abroad unlike,” she said. “My mother is unwell. I want to see her before her death,” she added.

In 2008 when Bushra Farooq, a resident of Khyber Pakhtunkhwa in Pakistan married a man from North Kashmir’s Baramulla who had gone to Pakistan for arms training, she had expected a happy married life. In 2012, her husband told her that he wanted to see his old parents in North Kashmir for which they received a 15 days visa and entered India through the Nepal route.

Bushra told her parents she would return after two weeks. However little did she know that her parents had to wait for eight long years and her separation with family still continues.

“My husband promised me we will return to Pakistan after he meets his parents in Baramulla. When we reached New Delhi, he took away my passport and never returned it. Since 2012, I have been fighting to return to my homeland like other Pakistani brides,” she said in a broken voice.

Here did not end the miseries for her. The Baramulla man divorced her in January 2019 and also took away her two sons aged 12 and 9.

At present she lives in a rented room in North Kashmir’s Kupwara district and works at a tailoring shop owned by another Pakistani woman Sara Jan.

“We trusted our husbands but they deceived us. My Ammi, Abu, three brothers and a sister are waiting for me. I feel insecure here by living alone in a rented room. I have been divorced then why am I not being deported to my homeland,” she asked in a visibly upset face. (KINS)

Assembly polls can be held once nomads return: BJP