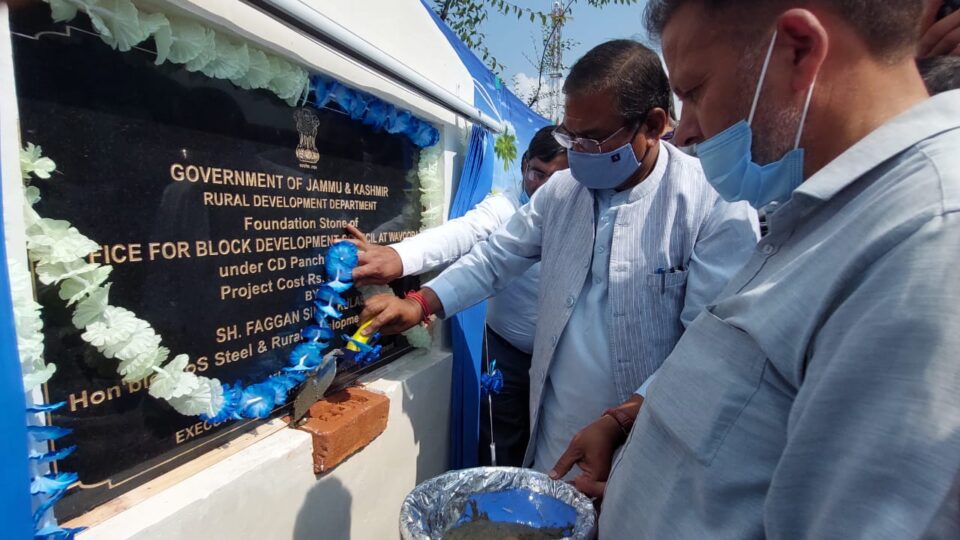 KUPWARA, OCT 01( KINS): Union Minister of State for Steel and Rural Development, Shri Faggan Singh Kulaste reached the frontier district of Kupwara on a two day visit today.
On reaching Kupwara, the Minister laid the foundation stones of Block Development Council Office at Wavoora and Alama Anwar Shah Sports Stadium, Kuligam coming up at a cost of Rs.97 lakh and Rs.20 lakh respectively in Lolab Subdivision of Kupwara district.
The Minister also laid e-foundation stone of 15 Solid Waste Management Plants costing Rs.1.20 crore coming up in the area.
Speaking at the occasion, the Minister said that the Government of India is committed to ensure overall development of all urban as well as rural areas of Jammu and Kashmir UT, adding that various flagship programmes aimed to develop infrastructure and economy in rural areas like Kupwara  district  have been yielding better results on ground level.
Chairman District Development Council (DDC) Irfan Sultan Panditpori, Vice Chairman DDC Haji Farooq Ahmad Mir; Deputy Commissioner Kupwara Imam Din, Director Rural Development Kashmir  Tariq Ahmad Zargar and DDC Member Wavoora were present on the occasion.
Responding to the demand of further release of funds, the Minister said there is no shortage of funds however submission of Utilization Certificates is a prerequisite for which Government will take sympathetic consideration.
He said extension and upgradation of road connectivity in hilly and far-flung areas is the priority of the Union Government.
Regarding power, education and other sectors, the Minister assured that all the demands projected by the people would be taken care of properly, adding that he will discuss these issues with Prime Minister Narendra Modi and with Lieutenant Governor Manoj Sinha.
The Minister said that the Government is providing 100 percent financial assistance in agriculture, horticulture and poultry sectors and stressed upon the youth to take advantage of these schemes to earn better livelihood.
The Minister assured that the memorandum submitted by Vice Chairman DDC Kupwara would be looked into on priority.
Earlier, Chairman District Development Council (DDC), Vice Chairman DDC, Deputy Commissioner Kupwara, DDC Member Wavoora besides representatives of Self Help Groups and youth clubs spoke on the occasion.
Later, in the afternoon, the Minister convened interactive meeting with DDCs, BDCs and PRIs, besides, public delegations, youth club and self help groups and got feedback regarding the implementation of different development programmes at ground level.
The Chairman DDC, Vice Chairman DDC, DDC Members, Chairperson BDCs and deputationists spoke on the occasion and projected demands of their respective areas. They also expressed gratitude towards the Union Government’s public outreach programme to JK UT including frontier district Kupwara.
The Minister heard them patiently and assured them that their genuine demands would be resolved on priority basis. The Minister also assured them that every demand of every Kashmiri would be resolved in a time bound manner.
The Minister also reviewed implementation of different development schemes in a separate meeting with District Administration in which Deputy Commissioner Kupwara Imam Din briefed the Minister about the development profile of the district. ( KINS)
previous post

Union Minister of State for Textiles and Railways visits Kulgam

Eid prayer at Eidgah at 10 am, at Jamia if rain