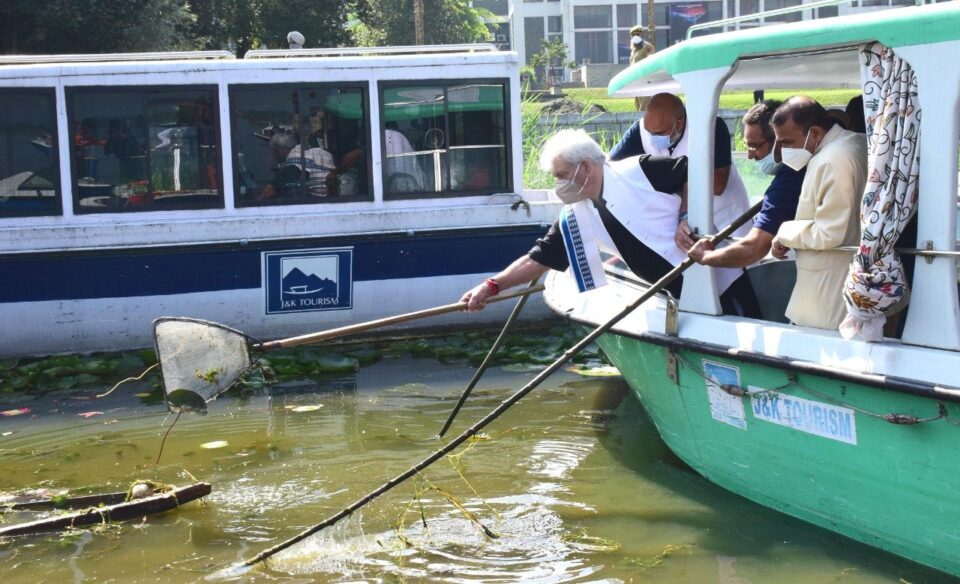 Srinagar, Oct 2 ( KINS): Jammu and Kashmir”s Lieutenant Governor Manoj Sinha Saturday said Dal Lake here has not been cleaned up to the level it was supposed to, and appealed to the people to cooperate with the UT administration to restore the pristine glory of the water body.

The LG launched a 15-day mega cleanliness and de-weeding drive of the lake under the Swachhta Pakhwada of Swachh Bharat Abhiyan, coinciding with the birth anniversary of Mahatama Gandhi.

Talking to reporters on the sidelines of the function, Sinha said attempts to clean the lake in the past have not borne the desired fruit yet.

“It is true that attempts have been made in the past, but we have not achieved that ”Swachh” level of the Dal Lake which should have been. There are some de-weeding machines functioning in the lake, some of which we have been hired as well and this has been going on for the past few days,” he said.

Extending the wishes on the birth anniversaries of Gandhi and former prime minister Lal Bahadur Shashtri, the LG said, “we all have taken a pledge of Swacchta” and the 15-day cleanliness drive will continue across the UT.

“We will be able to achieve the aim of ”Swachhta” only when the people here cooperate with us and become stakeholders. We appeal to the people that Dal lake belongs to everyone and we all will benefit from it only when it is clean. I will try to come here every alternate day and I appeal to brothers and sisters in Srinagar to take part in this cleanliness drive,” he said.

Earlier, Sinha also administered ”Swachhta” pledge to the officers of the UT at Raj Bhawan and Civil Secretariat.

He said the Swachh Bharat Mission Urban-2.0 and AMRUT-2.0 launched by Prime Minister Narendra Modi on Friday envisions clean urban spaces and water-secure cities, for which there is a need to work on a mission mode.

He directed the officers to execute action plans in a time-bound manner.

The LG said the PRIs and urban local bodies have a greater role in order to make the Swachhta Pakhwada successful and urged them to work on innovative ideas like adoption of a lake/ water body, school or places of public importance for cleanliness drive. (KINS)