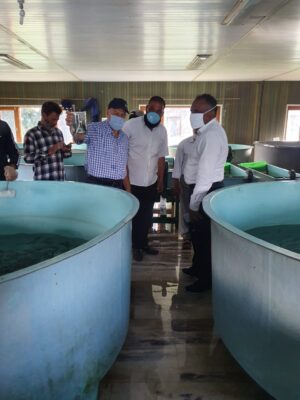 Anantnag Oct 04(KINS): Divisional Commissioner Kashmir, Pandering K Pole Monday visited Trout Fish Farming Project, Kokernag and went around the project to assess the Production.
Sources told news agency KINS that he was pleased to observe high production and appreciated Mohammad Muzaffar Bazaz Chief Project Officer, Kokernag and the dedicated staff who have achieved a revenue of Rs 2.05 crore.
In Anantnag district, a lot of fisheries farms have been established by people with the support of government. In June 2018, Anantnag district was also declared as trout fish district of India.

Known for its natural beauty, Kashmir has the distinction of having Asia’s largest trout fisheries farm in Kokernag Anantnag. The farm is supervised by Manzoor Ahmad, who has well expertise in rearing trout.

Spread over 20 hectares, the farm was set up in 1985 with support from the European Economic Committee.

There are 581 private trout fish units in Kashmir and 200 more are being established in next few months under Pradhan Mantri Matsya Sampada Yojana, a scheme to boost fish production and generate employment opportunities.

Let COVID go, Srinagar will have its first-ever mid-city ‘state- of- art hospital’

BJP activist shot at in Budgam