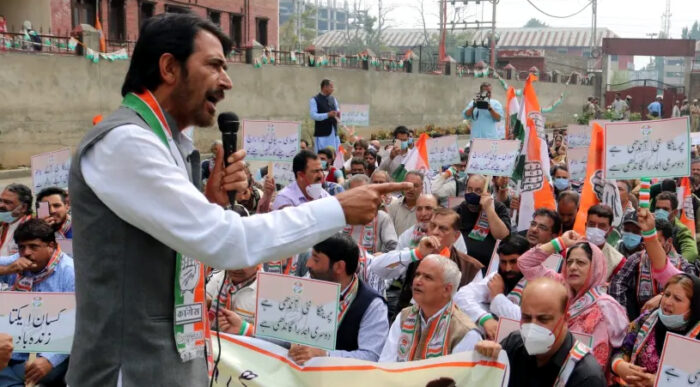 Srinagar, Oct 5 ( KINS): Jammu and Kashmir Pradesh Congress Committee (JKPCC) president Ghulam Ahmad Mir was briefly detained by police here on Tuesday as the party took out a protest march against the detention of Priyanka Gandhi in Uttar Pradesh.

Gandhi was detained on Monday in Sitapur in UP while on her way to Lakhimpur where eight people were killed in violence on Sunday. Four of the dead were farmers allegedly knocked down by vehicles driven by BJP workers travelling to welcome Deputy Chief Minister Keshav Prasad Maurya.

As part of the country-wide protests against the detention of the party general secretary, scores of Congress leaders and activists, led by the JKPCC president, tried to take out a protest march from the party office at M A Road here.

However, as soon as the protesters reached M A Road, police swung into action and tried to disperse them, officials said.

They said the police detained Mir and took him to police station Kothibagh here. Mir was released after a brief detention.

Police also dispersed the protesters, during which one Congress activist suffered minor injuries, they said.

Before being taken into detention, Mir told reporters that the protest was in support of the farmers who were protesting against the three farm laws as well as to express solidarity with their party general secretary.

“Today, Congress workers will remain on the roads across the country till she is released. This protest is to express solidarity with her and to support the farmers,” he said.( KINS)

No compromise on COVID-19 norms, Govt to Officials