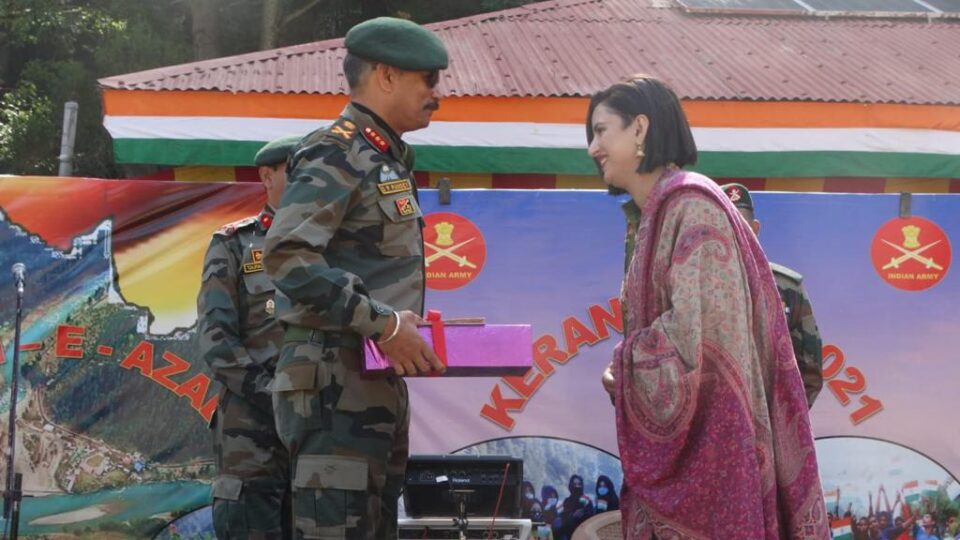 Srinagar, 06 Oct ( KINS). To add colours and vibrancy in the life of the villagers residing in the remote areas of Keran Sector, the annual Keran Mela was organised by the Army and the locals after a gap of two years, due to the ongoing pandemic. The event culminated on 06th October 2021. Lt Gen DP Pandey, GOC Chinar Corps was the Chief Guest. The Mela included many sports events, including cricket, volleyball, athletics, cross country and tug of war, besides cultural programmes for the villages of the Keran Sector. The Grand Keran Mela commenced on 18 Aug 2021 and culminated on 06 Oct 2021. It witnessed a very active and enthusiastic participation of 18 teams from various parts of Keran Sector besides teams from areas of Kupwara district too. The Cricket Tournament was clinched by Cobra XI Kralpora Team. Cricket was followed by an energy filled and nail-biting Volleyball competition between six teams of Keran Sector with Keran Team bagging the trophy. Other competitions also saw active participation of all villages.

With Women Empowerment being the theme of the event, several women achievers were also invited and attended it, including   Capt Tania Shergill, Indian Army’s first Woman Commander of an all-male Republic Day Contingent, Ms Ishrat Akhter, first International wheelchair basketball player from Baramulla, Ms Yana Mir, media panellist and Dr Mehar Rather, social worker, all of whom gave motivational talks to the locals of Keran Sector.

The Grand Finale on 06 October 2021, commenced with the Flag Hoisting by Lt Gen DP Pandey and releasing of tri colour balloons. This was followed by a march past by the NCC Cadets of Keran Sector. The events organised on the culminating day included finals of volleyball, tug of war, javelin and 100m sprint for children. A Cultural programme by the Zahoor Gilani group as a tribute to the rich Kashmiri culture, promoting happiness and bonhomie was the show stopper with songs by famous local artist Waqar Khan. It was very heartening to see groups of local youths dancing and celebrating with the army jawans. Several firsts in this year’s Keran Mela included, the walkathon competition for women, javelin throw, Inflatable Bouncy Rides, food stalls by popular eateries of Baramulla & Srinagar. All of these were seen on the final day of the celebrations with 100 feet high hydrogen balloons dotting the skyline. Distribution of trophies to winners by Lt Gen DP Pandey, marked the successful culmination of the Mela. The Grand Keran Mela generated tremendous goodwill and provided the villagers in this remote part of the country, a platform to showcase their talents. DC Kupwara, also attended the event and interacted with locals & gained valuable inputs about various projects and requirements. The locals expressed their gratitude and appreciation towards the Army for the successful conduct of Keran Mela.( KINS)