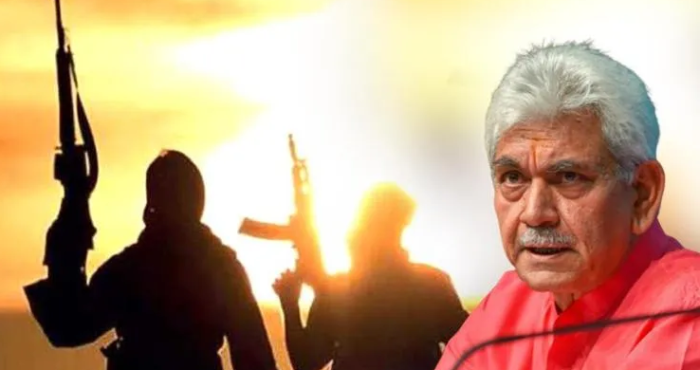 ‘Forces on alert across kmr valley’

Srinagar, Oct 06 (KINS): Following the disturbing incident in the valley where three civilians lost their lives in separate attacks by unidentified gunmen, Security has been put on high alert across the Kashmir valley.

AS per the reports the Lieutenant Governor (L-G) Manoj Sinha has also called for a security meeting in connection to the killings.

In the past few weeks, attacks on civilians have increased.

Top sources in the Police told news agency KINS that security has been put on high alert across the Kashmir valley.

“There is an increase in the number of Jammu and Kashmir Police personnel as well as paramilitary forces on ground.  More Barricades have been put in place in many areas of the city especially on the routes that are coming from the different districts towards Srinagar,” sources said.

On Tuesday within a span of sixty minutes, three civilians were killed in separate attacks.

Reportedly, the Resistance Front (TRF), has claimed responsibility for the attack near Srinagar’s Iqbal Park.

First killing happened of a famous chemist ML Bindroo who was shot at just outside his shop. After that a nonlocal vendor in Lal bazar area of Srinagar was shot at and later within an hour in a third attack a local was shot by unidentified gunmen in Bandipora district.

Sources said that soon after the attack there were major searches in different areas of the Srinagar city to nab the attackers.

Meanwhile, sources told KINS that J&K DGP is expected to review security in the valley while as per the reports Lieutenant Governor (L-G) Manoj Sinha has called for a security meeting in connection to the killings of three civilians.

The security review meetings come at a time when there has been a rise in attacks on Civilians in the Valley.

Sources said that LG will chair a security review meeting in which he will take a detailed review of the existing security arrangements in the Valley.

The meeting is likely to be attended by top officials of police and paramilitary forces and intelligence agencies.

“The discussions are expected to revolve around the security scenario in the valley and threat perception from the militants,” said a source.

Sources said that the LG will also emphasize on the critical importance of maintaining a sustained close watch on the ground situation and real-time coordination and synergy between different security forces to foil the “attempts of elements inimical to peace”.

Sources said that the LG will also take review about the various other security measures that have been taken in order to strengthen the security grid of the Valley including the strengthening of checkpoints at the sensitive locations across the Valley.

As per the home ministry data up to march, 2021, at least 59 civilians have been killed and 168 others injured in militancy-related incidents in Jammu and Kashmir since the abrogation of Article 370 in 2019.

However the data also suggested that no civilians were killed in a law and order situation since the abrogation of Article 370 in the newly formed Union Territory.

Meanwhile the Shiv Sena’s Jammu and Kashmir unit staged a protest over the killing of three civilians in the Union Territory.

An SSDF (Shiv Sena Dogra Front) member said “Makhan Lal Bindroo was a chemist shop owner who provided medicines to people and kept them alive. He was one of the oldest Kashmiri Pandits living here and never left. They killed him. They also killed a Muslim who was a transport business owner. Not only this, but they also killed a street hawker from Bihar”.

Illegal timber seized from person escorted by PSO in Surankote