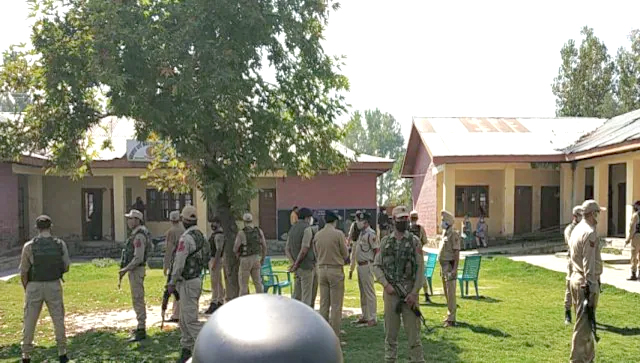 Sources said gunmen barged into the Government Boys Higher Secondary School at Iddgah Sangam in Srinagar’s Safa Kadal around  11:15 AM . “Few staff members including Supinder Kaur and Deepak Chand were in the courtyard on their chairs. They (gunmen) entered in to the school and fired upon  two teachers ,” a staff member told news agency Kashmir Indepth News Service (KINS).

The staff member said most of the teachers were having tea inside a room when this incident took place. “Then some locals also came and these two were taken to the hospitals but both were declared brought dead. Chand had bullets on his head while Supinder on her back,” the staff member said.

Following which the area was cordoned off and top police officials reached the spot. Supinder is from Central Kashmir’s Budgam district while Chand is from Jammu. Both were residing at a rented accommodation in Srinagar’s Alochi Bagh.

A pall of gloom engulfed Supinder’s home. “Who killed my daughter? She has never harmed anyone. They should have killed me instead,” her mother said, while other women trying to console her.

Similarly, on October 2, two Kashmiri Muslims were killed in Srinagar.

The killings sent shivers down the spine across Kashmir especially the minority community.

Director General of Police (DGP) Dilbagh Singh Thursday said that killing of unarmed civilians in Srinagar is a move to damage and attack the age-old traditional communal harmony in Kashmir.

“This is an attempt to defame local Muslims of Kashmir. Killing innocent civilians including teachers is a move to attack and damage the age-old tradition of communal harmony and brotherhood in Kashmir,” the J&K Police chief said. (KINS)

Kashmir: Love in the times of mobile and internet shutdown