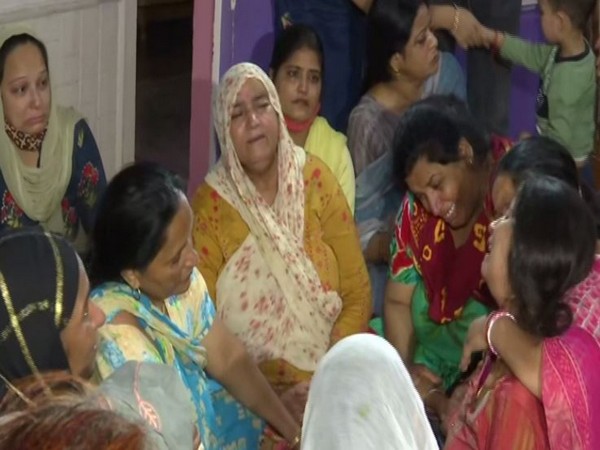 Jammu, October 7 ( KINS) : “Our daughter had asked him not to go. See what has happened,” says Sangeeta, the distraught wife of Deepak Chand, a schoolteacher who was shot dead by militants in the Kashmir Valley on Thursday.

“He had dropped us home in Jammu and returned to Kashmir just a few days back. My life and family have been ruined,” she says.

Chand, a teacher at the Government Boys Higher Secondary School in Eidgah in downtown Srinagar, was shot dead at point-blank range by militants around 11.15 am just when the school had settled down to another day of online classes. The school principal, Supinder Kaur, was also killed.

With this, seven civilians have been killed by militants in the Kashmir Valley in five days.

Scores of people gathered at Chand’s residence in Patoli area here as his family members, including his parents, struggled to come to terms with their loss.

The grief quickly turned into anger for some of the family members.

“The government says Kashmiri Hindus can return to the Valley. Deepak had gone back to his homeland as a teacher… In return, he got this reward,” Chand’s cousin Ashwani Kumar said.

“They (militants) have killed my brother. He has a 3-year-old daughter… The government should give us justice,” said Chand’s brother, Vijay.

Vijay demanded that the government provide security to all Hindus working in the Kashmir Valley before it is too late.

The family members said that the spate of civilian killings—the worst since Jammu and Kashmir’s special status under Article 370 was revoked in August 2019 — reminded them of the 1990s when minorities, especially Kashmiri Pandits, were targeted by militants, triggering their exodus from the Valley.

Chand, a Hindu, and Kaur, a Srinagar-based Sikh, were killed two days after The Resistance Force, a shadow outfit of the banned Lashkar-e-Taiba, claimed responsibility for the deaths of three people on Tuesday.

Makhan Lal Bindroo, a prominent Kashmiri Pandit and owner of Srinagar’s most famous pharmacy, was shot dead at his shop on Tuesday evening. Minutes later, a ‘chaat’ vendor, Virendra Paswan from Bihar, was gunned down elsewhere in the city. Almost simultaneously, another civilian, Mohammad Shafi Lone, was killed at Naidkhai in Bandipora.

Central Ministers on sabbatical  in J&K at public expense: Harsh