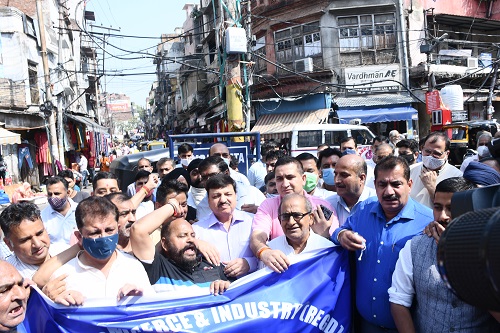 Jammu, Oct 8 ( KINS):Chamber of Commerce and Industries (CCI) Jammu along with Trader Associations of Old City today staged strong protest against the
unabated and innocent killings in the Kashmir Valley. Led by Arun Gupta, President Jammu Chamber, the CCI office bearers
along traders of various business organizations Kanak Mandi, Raghunath Bazar, Pacca Danga, Shalamar Road, Old Hospital Road, Hari Market,
Gumat Bazar etc  assembled at City Chowk area of Jammu city and raised slogans against the Anti national forces funded by Pakistan
Talking to reporters, Arun Gupta strongly condemned the unremitting killings in Kashmir Valley during the past few days especially the
three killings in an hour on Tuesday evening and the killing of the principal and teacher yesterday. He termed the killing of teachers by
terrorists is cowardice attack on the minorities of Kashmir.
Gupta described incidents of terrorists’ attack in Srinagar as a cowardly act of disruptive and anti-national forces backed by Pakistan
ISI. He said that the government should act tough and catch hold of the perpetrators of the terror in the Valley to teach lesson of life
to terror mongers and ensure that they face law at the earliest.
The Jammu Chamber President urged the Lieutenant Governor to bring perpetrators of this crime to justice and assured the security of
minorities in Kashmir. He demanded that the Central and UT administration must ensure foolproof safety and security of people,
especially the minority communities in the Valley. He also appealed to the people of Jammu and Kashmir to be united to defeat vested
interests of people, who are trying to disturb peace and to damage communal harmony.( KINS)
previous post

Streamlined Drainage is the need to avoid damages from rains: Sat

NC will continue to fight alone for Article 370’s restoration, if Cong not ready for it: Omar