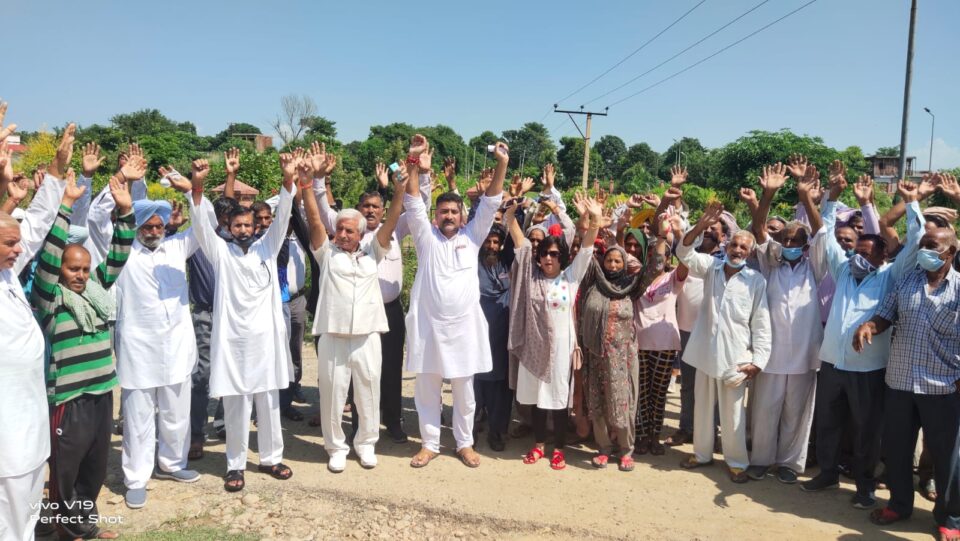 Jammu, Oct 9 ( KINS): All Jammu and Kashmir Panchayat Conference (AJKPC)—a registered organisation of elected PRI members—has accused the UT administration of willfully creating friction among the members of Panchayati Raj Institutions (PRIs) and warned that it would have serious repercussions for grassroots level democracy in Jammu and Kashmir.

Led by the UT President of AJKPC Anil Sharma, scores of PRI members staged a noisy demonstration against the mass resignation of over 40 Sarpanches of Ramban district to protest the humiliation meted out to them during the recent visit of the Union MoS for Rural Development, Sadhvi Niranjan Jyoti in the district.

The protestors chanted slogans against the administration for sidelining Sarpanches and Panches during public outreach programmes of the Union Ministers across the UT.

“Since the elections to Block Development Councils (BDCs) and District Development Councils (DDCs), the government has deliberately been creating a divide among first-tier representatives (Panches and Sarpanches) and, second and third-tier representatives (BDCs and DDCs) under a hidden agenda. It will only defeat the basic purpose of Panchayati Raj System, i.e strengthening of grassroots level democracy in J&K,” Sharma said.

The AJKPC leader said the administration has created such an atmosphere where Sarpanches and Panches have been feeling neglected and overlooked notwithstanding they are the foundation of grassroots level democracy.

“A sense of hostility is being allowed to prevail between Sarpanches and BDCs & DDCs under a well-planned design. Only DDCs are now being considered as the representatives of PRIs in Jammu and Kashmir and it was witnessed during the Centre’s much-touted public outreach programmes. This mindset will not only make such outreach programmes a big failure but also lead to serious repercussions for grassroots level democracy,” Sharma said.

The leader said that the local administration was not honouring the protocol extended to Sarpanches besides causing utter humiliation to them. “Only DDCs and selective BDCs have been invited to attend the public outreach programmes while Sarpanches and Panches have been neglected. The UT administration owes an explanation to the people as to whether it is intended to dis-empower the people by ignoring the grassroots level representatives of the people,” Sharma said.

Cautioning the authorities against any attempt to create a wedge between PRI members, the AJKPC chief warned that this mindset will not only add to the alienation among Sarpanches and Panches, but also destabilize the Panchayati Raj System.( KINS)

‘No need for it’: J&K Lt Governor Manoj Sinha rules out possibility of AFSPA repeal