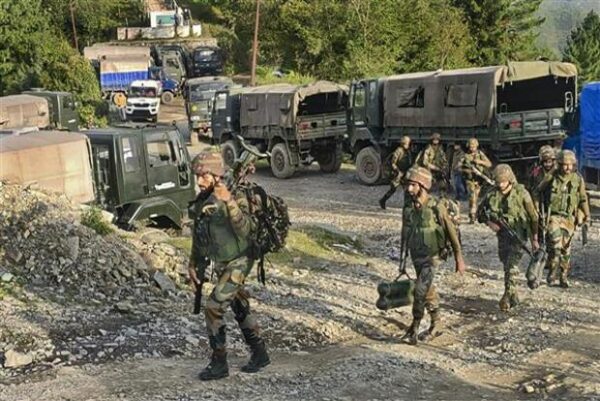 Jammu, Oct 11 (KINS) Five Army personnel, including a Junior Commissioned Officer (JCO), lost their lives in a fierce gunfight with militants during an operation in Poonch district of Jammu and Kashmir on Monday, officials said.

The operation was launched in a village close to Dera Ki Gali (DKG) in Surankote in the early hours following intelligence inputs about the presence of militants who had infiltrated from across the Line of Control (LoC).

A Defence spokesman said the ultras opened heavy fire on search parties resulting in critical injuries to the JCO and four other personnel.

All the five soldiers succumbed to their injuries at a nearby military hospital where they were shifted from the scene of the gunfight, he said.

The encounter with the militants was going on and further details are awaited, the spokesman said in the evening.

There has been a spurt in terrorist attacks in recent weeks in which several civilians, including a prominent Kashmiri Pandit businessman and a school teacher, were killed.

The officials said there were inputs about the presence of a group of heavily-armed militants in Chamrer forest after they managed to sneak from across the LoC.

After the initial encounter, the militants fled to nearby Bhangai village, which falls in Rajouri district, and an encounter is underway to neutralise the ultras, they said, adding all possible escape routes have been plugged.

The twin districts of Rajouri and Poonch in the Jammu region have witnessed a rise in infiltration attempts since June this year, resulting in the killing of nine militants in separate encounters.

Three soldiers also laid down their lives in the previous operations.

Earlier in the day, two militants were killed and a policeman was injured during encounters in Jammu and Kashmir”s Anantnag and Bandipora districts.

Activists of Shiv Sena and Dogra Front held anti-Pakistan protests after the death of five army personnel and burnt an effigy of the Pakistan Prime Minister Imran Khan for aiding and abetting terrorism in Jammu and Kashmir.

Meanwhile, the Jammu and Kashmir unit of the Congress expressed shock and grief over the killing of five Army personnel and urged the BJP-led government to take effective measures to contain Pakistan-sponsored terrorism in the Union Territory.

J&K Pradesh Congress Committee (JKPCC) president G A Mir and other senior party leaders described the terrorist attack as a “cowardly act” and saluted the bravery of the soldiers who sacrificed their lives for the nation.

The party, in a statement, expressed serious concern over the rising incidents of terrorist attacks in Jammu and Kashmir.( KINS)

Jammu too should have political narrative, says Devendra Singh Rana after joining BJP