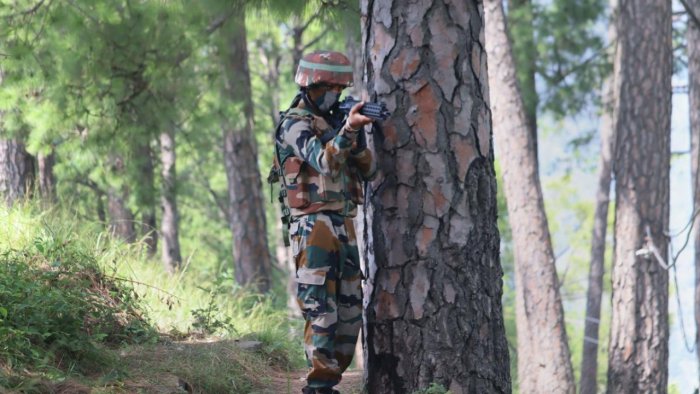 Jammu , Oct 12 ( KINS) Security forces continued a massive search operation on Tuesday in a forest area connecting the twin border districts of Rajouri and Poonch in Jammu and Kashmir, where five soldiers including a Junior Commissioned Officer (JCO) were killed in a gunfight the previous day, officials said.

There was no fresh contact with terrorists during the ongoing operation in the dense forest areas of Surankote in Poonch and nearby Thanamandi in Rajouri, the officials said.

Five soldiers, including a JCO, lost their lives when a group of heavily-armed terrorists opened fire on an army search party in a village close to Dera Ki Gali (DKG) in Surankote early on Monday.

After the initial encounter, the terrorists fled to nearby Panghai forest which falls in the jurisdiction of Rajouri’s Thanamandi and were chased by the troops and engaged in another encounter, the officials said.

The gunfight between the two sides stopped Monday evening after the terrorists took advantage of the dense forest and fled, the officials said, adding that the whole forest belt was cordoned off and a search operation is underway to neutralise the hiding terrorists.

The officials said senior police and army officers also rushed to the area to supervise the operation.

Earlier, a defence spokesman said on the intervening night of October 10 and 11, a counter-terrorist operation was launched by the Indian Army and Jammu and Kashmir Police in the area of Shahdara, near the boundary of Poonch-Rajouri districts.

“During the conduct of the operation, terrorists brought down a heavy volume of fire on Army troops leading to fatal injuries to one JCO and four soldiers,” a defence spokesman had said in a statement here.

He identified soldiers who made the supreme sacrifice in the line of duty as Naib Subedar (JCO) Jaswinder Singh, a recipient of Sena Medal; Naik Mandeep Singh, Sepoys Gajjan Singh, Saraj Singh and Vaisakh H.

The twin districts of Rajouri and Poonch in Jammu region have witnessed a rise in infiltration attempts since June this year, resulting in the killing of nine terrorists in separate encounters. Three soldiers also laid down their lives in the previous operations.

Meanwhile, a group of youth staged an anti-Pakistan demonstration in Poonch town against the killing of Indian army soldiers.

The youth, mostly belonging to the Sikh community, also set ablaze an effigy marked as Pakistan for its continued support to terrorism in Jammu and Kashmir, the officials said.

“We condemn Pakistan for its continued support to terrorism in Jammu and Kashmir. The time has come when the Indian government should teach Pakistan a lesson for sending terrorists who are killing innocent civilians and our jawans,” Kamaljeet Singh, one of the protesters said. ( KINS)

Mechanism in place for ensuring Academic session does not suffer: Advisor Sharma