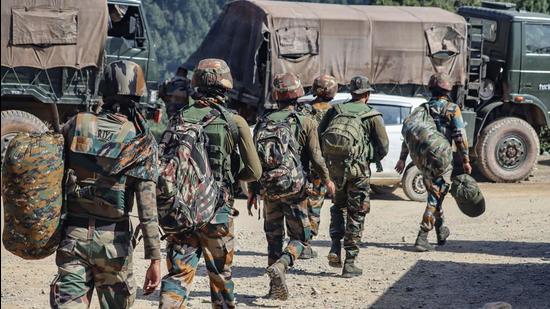 Srinagar, Oct 12 ( KINS) :Five militants were killed in separate gunbattles with security forces in Jammu and Kashmir (J&K)’s Shopian district on Tuesday amid an intensification of counter-insurgency operations following a series of targeted attacks that left seven civilians dead this month. One of the five was involved in the killing of a street vendor in Srinagar, a police officer said.

A series of operations have been launched across Kashmir since the killing of seven. Police said two of the militants involved in two civilian killings at Hajin and Srinagar have so far been killed. They added the five militants killed on Tuesday included Mukhtar Shah, who shifted base from Ganderbal district to Shopian after allegedly killing the vendor, Virendra Paswan.

Police said three militants were first killed in an overnight firefight that started late Monday in Shopian’s Imam Sahib area. As the operation was underway, another gunbattle began at Feeripora in which two militants were killed.

Defence spokesman Emron Masuavi said a joint operation was launched in Feeripora following inputs from the J&K Police. “Repeated surrender appeals were turned down by militants, who fired on forces in return, forcing the forces to take action. In the gunfight two militants were eliminated,” said Masuavi. He added an AK 47 and war-like stores were recovered from the spot.

On Monday, police said Imtiyaz Ahmad Dar, who went underground after allegedly killing taxi driver Mohammad Shafi Lone last week, was killed in another gun battle at Gundjahangir in Bandipora district. Four people were arrested in connection with Lone’s killing on Sunday, police said. Police said the killing was carried out at the behest and instructions of Lashkar e Taiba handler Lala Umar of Pakistan.

One terrorist was killed in another exchange of fire with security forces in Verinag on Monday. A policeman was also injured.

Three exchanges of fire were on Monday reported across the Valley on the day five soldiers, including a junior commissioned officer, were killed in an exchange of fire with heavily armed militants in a forested area at Surankote in Poonch district amid a spike in violence in the region.Security forces have killed 120 militants, including over a dozen top commanders, in Kashmir this year. ( KINS)

Zaira Wasim’s No to acting says it affected her Imaan

Back to Village commences