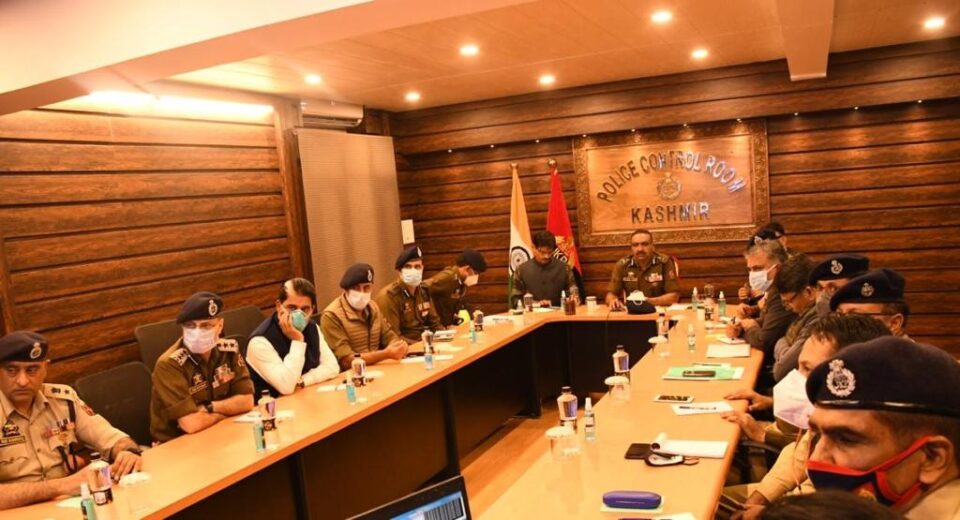 Surveillance systems must be ensured to undo nefarious plans of the enemies: DGP to officers

Addressing the meeting, the DGP emphasized on the collective measures to tackle security situation and subversive acts by the terrorists and their masters across the border. He stressed upon all officers to put in place effective measures for maintaining peace and order in coordination wih CAPFs. He said that Pak sponsored elements are time and again making attempts to damage growing peaceful atmosphere here to disturb normal public life and said that these evil attempts would be dealt with fortitude. Underscoring the need of pro-active role of law enforcement agencies, the DGP directed the officers to make optimum use of modern tools to monitor the suspected movement of anti-national elements.

The DGP said that improvement in the security situation is upsetting the elements inimical to it and it is paramount for us to defeat such designs of anti-national and anti social elements. He stressed for enhanced security measures and anti terrorist operations.
The DGP directed the officers to maintain close surveillance and track of such elements and bring them to justice as quickly as possible by way of well coordinated measures.

Complimenting the recent anti terror operations leading to neutralisation of the perpetrators involved in recent innocent civilian killings, amounting to an onslaught on the local values of peace and brotherhood and the dastardly and barbarian acts of terror which attracted a large scale condemnation from all sections and parties in Kashmir, the DGP directed the officers to continue to safeguard the age old traditions of love and respect for peaceful coexistence of all sections and communities of Jammu and Kashmir and not to allow the enemies of civil society succeed in creating a wedge between the people. He stressed that action be continued against all those involved in inhuman activities. He said that forces should remain more vigilant in view of recent increased infiltration bids of terrorists from across the boder.

The DGP directed the officers to further strengthen and augment the intelligence as well as security grids in their respective areas for the safety and security of the people. The DGP reiterated the importance of maintaining close synergy between the J&K Police and other agencies to meet the security challenges. He directed officers to remain extra alert

The meeting deliberated on present security scenario in the Valley. The officers representing different wings, units and districts briefed the DGP about the measures put in place for maintaining peace and order and ensuring security of the people.( KINS)

Masrat Aalam sent to NIA custody for next 10 days