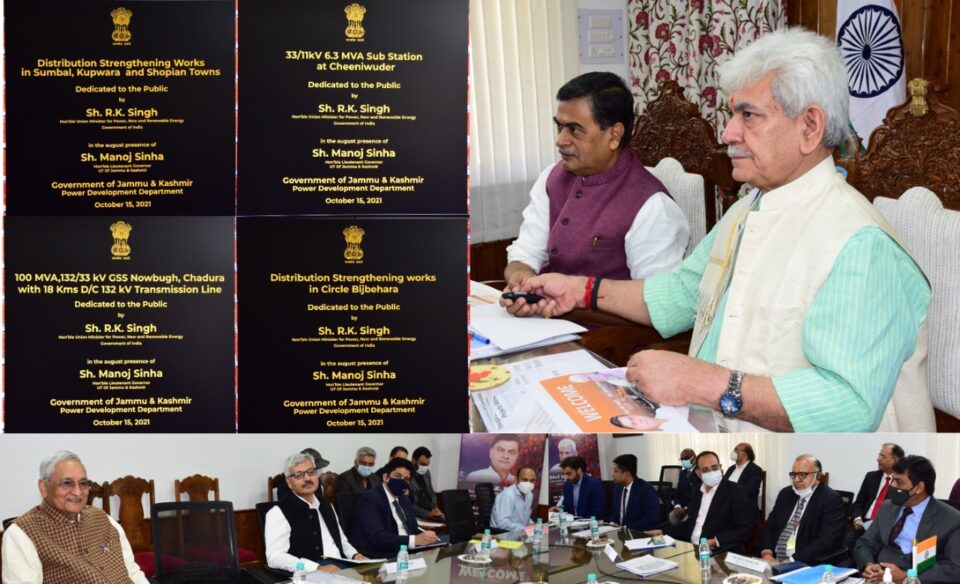 SRINAGAR, OCTOBER 15 ( KINS) : The Government of India is committed to providing all possible support to J&K across generation, transmission and distribution sectors in order to make J&K power surplus, remove all supply constraints and provide 24X7 quality power to all citizens of J&K.

This was affirmed by Union Minister for Power and New and Renewable Energy, R. K. Singh who is on a two-day visit to J&K. He also reemphasized the commitment of the government to provide 24X7 quality power supply across the UT of J&K for improving the ‘Ease of Living of citizens’ and ‘Ease of doing business for the industries’.

He was speaking on the sidelines of the inaugural ceremony of 6 transmission and distribution projects worth Rs 118 crore which were jointly e-inaugurated by the Union Minister and Lieutenant Governor of J&K, Sh Manoj Sinha here at Raj Bhavan.

Speaking on the occasion, Lt Governor, Manoj Sinha outlined the efforts made by the government to meet the power supply-demand of the people.

The Lt Governor further outlined how the UT had attained remarkable progress not just in adding over 150% transformation capacity but also succeeding in increasing revenues by over 23%. The UT Government was already working on detailed plans to add infrastructure, address obsolescence and cut down losses, he added.

We have eliminated the past practices of delays and have accelerated the pace of execution of power projects. Now long overdue upgradation of power infrastructure and languishing projects are being completed in record times, observed the Lt Governor.

The UT of J&K presented an investment plan of Rs. 12000 Cr by 2025 in transmission and distribution sectors in order to strengthen infrastructure as well prepare a future-ready power infrastructure that would not just provide power on demand to all citizens but would also cater to the industrial demand in line with the proposed investment of Rs 28,400 crores under J&K’s new Industrial Policy.

In the transmission sector, J&K suggested evacuation of Renewable Power, both Solar & Wind from Ladakh, through J&K and presented a detailed proposal. It was agreed that the comprehensive Rs 4971 crore investment plan prepared by the UT with the support of the Central Electricity Authority (CEA) would be executed immediately. JKPDD would explore the option of a Joint Venture Company between the J&K TRANSCO and any reputed CPSU like PGCIL to execute the projects.

On the distribution side, the Minister of Power reiterated his commitment of full support to the UT under the Revamped Distribution Sector Scheme and asked J&K would prepare a comprehensive plan by including the latent power increase predicted on account of the Industrialization of J&K and by conducting area wise system studies including a comprehensive gap analysis and a future proof roadmap.

It was agreed that as a first step, J&K DISCOMS would introduce a new arrangement in the current year to maximum power to all feeders with the least losses and where electricity meter coverage is progressively saturated. RECPDCL was also asked to accelerate the pace of installation of meters so as to complete the installation of 2 lakh meters by March 2022.

Earlier, the Union Minister took a detailed review of the Power Scenario of J&K including status of implementation of Centrally Sponsored Schemes (CSS). The Principal Secretary PDD made a presentation in which he presented a brief overview of power demand, availability, consumer mix and energy consumption.

Referring to the IT sector and e-governance initiatives, Secretary (Power) J&K informed the Chair that in order to ensure data authenticity and integrity, the Department has initiated the process of monitoring energy flow, consumption, revenue realization and other critical information related to the feeders to monitor AT&C losses, feeder-wise outages and reliability indices on real-time basis through an in-house developed e-portal.

The department has achieved 100 percent feeder metering and a total of 647 Urban Feeders of JKPDD have been on-boarded on the National Power Portal (NPP) and the process of on-boarding of remaining feeders is in process. Similarly, for improving the life cycle of DTs, an innovative step of assigning Unique Identification Number (UIN) to all the DTs, punching of UIN on the DTs and maintenance of the computerized database of DTs containing complete technical details/repair history is already underway.

Various steps have also been taken to improve consumer responsiveness which includes the establishment of separate cloud-based e-customer care centres at Jammu and Srinagar cities for end-to-end redressal of consumer complaints, social media interactions through Twitter handle and formation of WhatsApp groups at all levels.

He further informed that all the projects, sanctioned under different CSS stand awarded to the implementing agencies and are at different stages of execution. He also highlighted the difficulties being faced in some projects and requested for support of the Ministry of Power.

Later in the day, the Minister visited Gurez where he inspected the upcoming SHP for providing supply to the local area. He also directed NHPC to commission another 16 MW SHP in Gurez to cater to the needs of the local population.

On the demands of the locals for stable grid power, the Union Minister issued directions to the Ministry to assist J&K in removing all technical and financial bottlenecks and ensuring the completion of the line to Gurez on priority.( KINS)

CB grills Ex-minister over illegal allotment of works in JKPCC