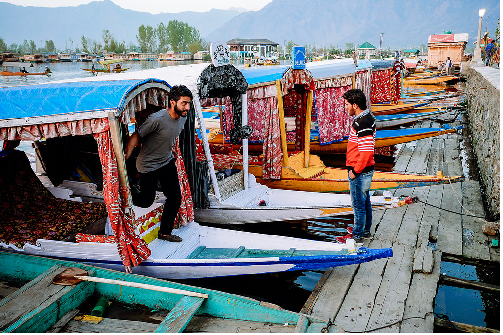 Srinagar Oct 15 (KINS): The recent civilian killings have impacted the tourism sector in Kashmir with tourism players saying these incidents have led to 20 percent cancellation of bookings.

Since October 2, seven civilians have been killed in Kashmir with six alone in Srinagar. Among them three were Muslims and four non-Muslims.

The killings have also impacted the tourism sector, which is considered the backbone of the Kashmir economy.

Tariq Ahmad Patloo, a houseboat owner, told news agency Kashmir Indepth News Service (KINS), “There has been 20 cancellation of bookings. The reason is that the way the media exaggerates the news about Kashmir, tourists are afraid to come here. An atmosphere has been created about Kashmir that non-Muslims are being selectively killed here, but the reality is different.”

Abdul Rashid, Secretary General of the Houseboat Owners Association, says that 10-20% of bookings have been canceled after the recent killings.

Farooq Kuthu, President of the Travel Agents Association of Kashmir, said that after the recent killings, a few bookings have been canceled.

“Tourism showed good recovery after improvement in COVID situation. Tourists who used to go to other countries are coming to Kashmir. But recent killings have led to some cancellation of bookings,” he added.

Mohammad Shafi who runs a photography shop in Dal Lake would earn Rs 2000-2500 a day, but suddenly his earnings have fallen in the last one week.

He said, “First there was a lockdown after the removal of Article 370, then everything was closed due to COVID. Now tourists are coming here but after the recent killings, tourists have started cancelling their bookings.”

Manpreet Kaur, a tourist said, “After the recent killings, I was scared that I don’t know what kind of atmosphere will be in Kashmir, but after coming here I feel very comfortable. Negative news of Kashmir is being exaggerated by the media.”

This year so far, about 3 lakh tourists have come to visit Kashmir. At the same time, 1.5 lakh tourists came only in the last 3 months.

“Most of them have been visiting since July when COVID cases started going down. There was very less inflow of tourists between February-June,” an official of the Tourism Department said.

The increase in tourist flow is linked to decline in COVID cases. “For last three months the COVID cases have gone down and with vaccination programmes, the tourists are returning to the Valley, thus making the stakeholders hopeful of a good tourist season ahead,” the official said.

The official said training has been provided to all the stakeholders associated with the tourism sector so that the tourists visiting Kashmir during this season can feel safe.

Leading travel firm Thomas Cook India and SOTC Travel has surveyed over 4,000 customers across more than a dozen Indian cities to identify emerging consumer behavior and trends that will drive travel preferences in the COVID era.

The consumers were surveyed after the government’s announcement of unlocking or easing of travel restrictions.

The findings in the survey showed that Kashmir is the most preferred destination of travelers in the domestic tourism category. (KINS)