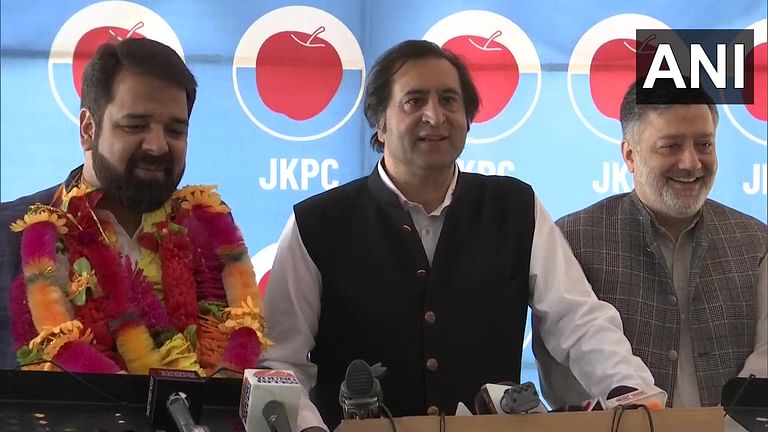 Srinagar Oct 16 ( KINS): Hilal Rather, son of veteran National Conference leader and ex-Finance Minister, Abdul Rahim Rather formally joined Sajad Gani Lone led People’s Conference at the party headquarters in Srinagar on Saturday.
Hilal was welcomed into the party fold by Sajad himself along with other party leaders including General Secretary Imran Reza Ansari, Syed Basharat Bukhari and Safina Baig among others.
On the occasion, PC General Secretary, termed Hilal’s joining the party as a good omen while hoping that more people will join “the caravan of change”.
PC Chief, Sajad Gani Lone while welcoming Hilal into the party fold, said, “People’s Conference has arrived. Let there be no delusions. There are many who refuse to see reality as it exists and want to create reality as they want to see it. I want to tell those delusional people that we have arrived to conquer for the best of the people of J&K”.
As for Hilal, the son of veteran NC leader said on the occasion, “I haven’t consulted my father while joining PC. I have huge respect for him”.( KINS)

Will work for betterment of sports infrastructure, sports personalities once in power: Sagar

J&K should be bridge of peace between India, Pakistan and China: Mehbooba Mufti
‘Our battle is for restoration of special status’

Tourism land encroached in guise of Eidgah in Kupwara