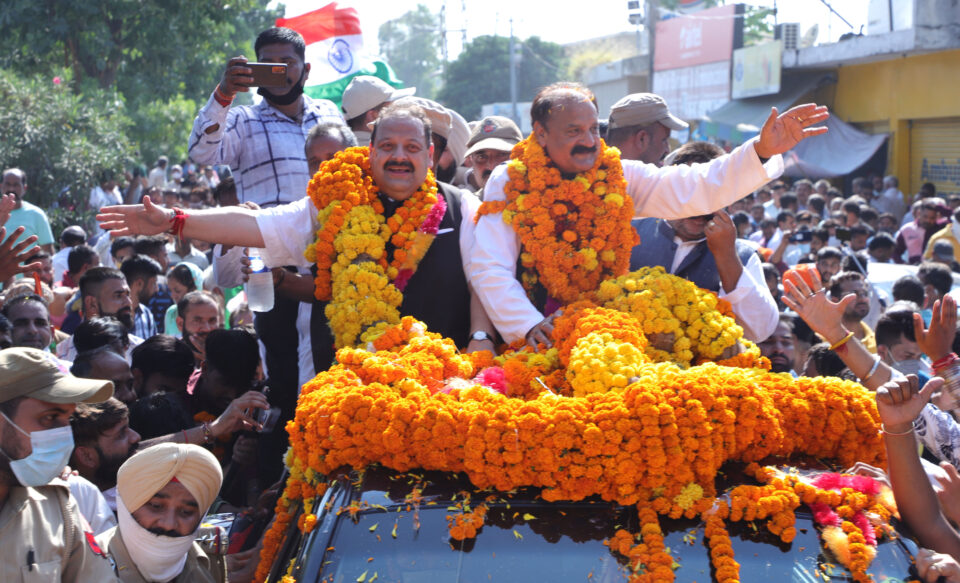 JAMMU OCTOBER 16 ( KINS)- With Jammu rising to huge and unprecedented reception to Devender Singh Rana and Surjeet Singh Slathia on their maiden visit to the City of Temples after joining the BJP in New Delhi, Mr Rana strongly pitched for upholding the cause of Jammu, saying he will not compromise with the interest of the region even if it meant sacrificing his political career.
“Jammu Declaration, a concept of Jammu, for Jammu and by Jammu, is a narrative from here for inclusive Jammu and Kashmir to achieve the objective of socio-economic, political and developmental parity between all the regions and sub-regions with no region and no section, irrespective of caste, creed and religion, nurturing feeling of deprivation or discrimination, domination or subjugation”, Mr Rana told a strong gathering of thousands after arriving his residence in a mega rally from Airport, covering the distance of less than two kilometers in three and half hours, adding that the unpredented affection and enthusiasm demonstrated by the people is actually endorsement of the Jammu Declaration..
Mr Rana, flanked by Surjeet Singh Slathia, said they will stand for the Jammu cause, come what may. For this purpose a concept has emerged, which seeks fair play in governance, funds distribution, jobs and other resources with a tag to equitable opportunities to all and appeasement to none. He vowed to pursue this agenda religiously as the ownership of the concept goes to the people of Jammu, he added.
“I have been, am and would serve the people as their servant and those knowing me can vouch for it on the basis of my service to the people”, emotionally overtaken Rana said amid chants of ‘Jammu, Jammu, Jammu, Jammu’, adding that the land of warriors has to retrieve its pristine glory. This can’t be achieved by an individual but a collective and united effort by people of all shades and walks of life would be needed. He said by Jammu he always means Jammu, Samba, Kathua, Reasi, Doda, Kishtwar, Poonch, Rajouri, Udhampur, Ramban and all other areas. Jammu’s assimilative ethos encompasses the entire Jammu and Kashmir, its people, its ethos and its glory, he maintained.
Addressing the rally, Surjeet Singh Slathia expressed his gratitude to the people for bestowing them a lot of affection, saying this speaks of their yearning to see Jammu flourishing economically, socially and politically.
Slathia said the support of the people will encourage them to work for them single mindedly with a mission to make Jammu and Kashmir a better place to live in.
The rally, comprising young and old, lined up outside the Jammu Airport, chanting slogans in favour of Devender Rana and Slathia, extending their unequivocal support. The horse, car and bike rally with riders in traditional costumes escorted the two leaders to Rana Residence in Green Belt Park. The leaders, atop a tastefully decorated van, kept waving at the crowds enroute. They were profusely garlanded and the supporters kept showering flower petals on them. The cultural ambassadors of various areas of the Jammu region kept dancing on drum beats as the enthusiasm ran high among the supporters. ( KINS)