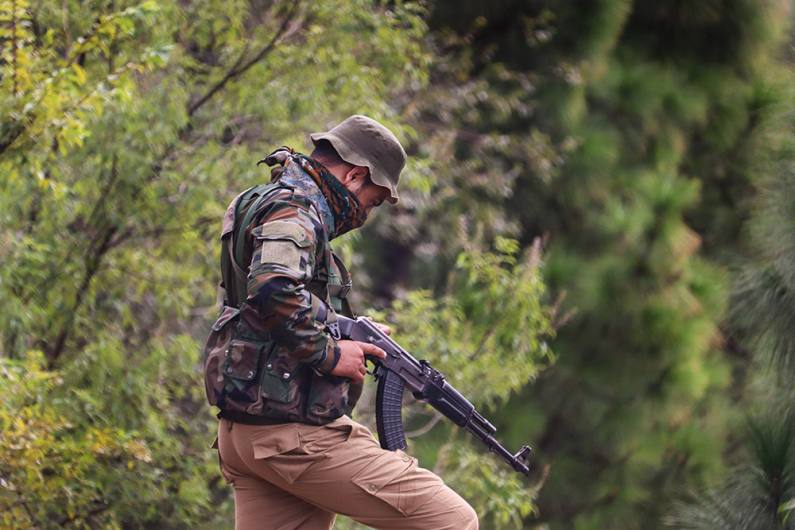 JAMMU, Oct 18 ( KINS): Exchange of fire between security forces and a group of militants hiding in Mendhar forests began Monday as the gun battle in Poonch district of Jammu and Kashmir that has so far witnessed the killing of nine soldiers resumed on the eighth day at the break of dawn.

“As per inputs, 3-4 militants are engaged in the gunfight,” the sources said. Paratroopers were inducted on Saturday to take on the heavily-armed militants hiding in the forests as the union territory witnesses one of the deadliest encounters post abrogation of Article 370 removing special status to the erstwhile state.

Official sources said the joint team of Army, police, para military troops along with elite commandos were already searching the Nar Khas forests of Mendhar. Helicopters are also being used to track down the militants.

“The militants are holed up in a dense forested area and firing intermittently which is effectively being retaliated by the search parties,” they said.

Army personnel have been advancing cautiously as the militants, who are heavily armed, appear to be well entrenched in the forests, the sources said.

In the week-long gunfight that started on October 11, so far nine Army personnel, including two Junior Commissioned Officers have been martyred. The operation to flush the militants out has proved to be tough, especially due to the difficult terrain and dense forests thus prolonging the gun battles.

Security forces as per sources, have also detained two persons for allegedly providing logistics support to the militants.

“During searches on the basis of intelligence inputs, two persons have been detained for providing food and shelter to a group of heavily armed militants,” the sources said. The detainees were being questioned for more details.

The National Highway 144-A, connecting Poonch district headquarter with Rajouri and Jammu was partially opened on Monday after remaining closed between Bhimber Gali and Jarran Wali Gali till Sunday. (KINS)

Killing of civilians is a heinous crime, Kashmiris won’t tolerate this: Saifuddin Soz

It is our utmost duty to ensure the benefits of government schemes reach the last person: Lt Governor

Woman commits suicide after jumping in Chenab river in DOda