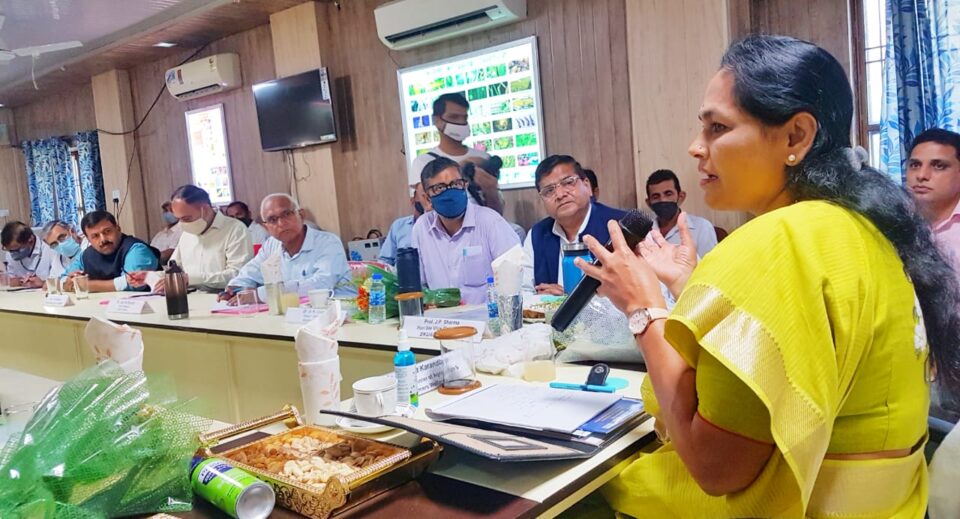 KATHUA, Oct 19 (KINS): Union Minister of State for Agriculture and Farmers Welfare, Shobha Karandlaje concluded her two day tour to district Kathua as part of Central Government’s Public outreach programme today.
Shobha Karandlaje flagged off a rally from the premises of Chenab Textile Mills organized as part of ‘Azadi Ka Amrit Mahotsav’ celebrations. Over 200 students and members of Youth Clubs participated in the rally which culminated at Govindsar.
While addressing the participants, the union minister appreciated the students and members of youth clubs for showing their zest in remembering freedom fighters which is befitting tribute to all the Heroes of freedom struggle especially when India is celebrating 75 years of Indian independence.
The minister also met various deputations of DDCs, BDCs, and ULBs besides members of different political parties.
While assuring members of DDCs for taking up various issues highlighted by them at appropriate forums, the minister said the issues related to payment by FCI to those farmers who do not have documents supporting their ownership rights will also be looked into. Besides issues related to opening of more procurement mandies, increase of scale of procurement, etc. requires intervention and solution at local level. She also assured that the left over issues will be taken up with the concerned ministry to ease out difficulties of the farmers.
Regarding the demand of opening of sugar mills in the border belt of Kathua put forth by BDCs, the minister advised to rope in private players through PPP mode. About the demand of dedicated mandi for basmati paddy crop, the minister said efforts should be made to utilise the platform of APEDA for exploring the scope of exporting local basmati of Kathua district.
The other demands highlighted by the elected members of PRIs, ULBs and other groups include utilising Lakhanpur civil infra for creating  job opportunities  for local youth,  improved water availability in kandi areas, promotion of aromatic, medicinal and citrus plants, sanctioning of new borewells and establishment of more mandies in scattered areas of the district.
Later the minister visited Krishi Vigyan Kendra (KVK), Kathua where she met with VC SKUAST Jammu who apprised her about the need to open another KVK in the hilly belt of Kathua district to cater the demand of the farming community.
While speaking on the occasion, the minister said the advancements made in the field of agricultural research should reach the last mile user. She also suggested organising meetings involving all the stakeholders from time to time so as to get feedback from the farmers on a regular basis. She said the government of India is focusing on the concept of Integrated Farming so as to enhance the income of farmers. (KINS)
previous post