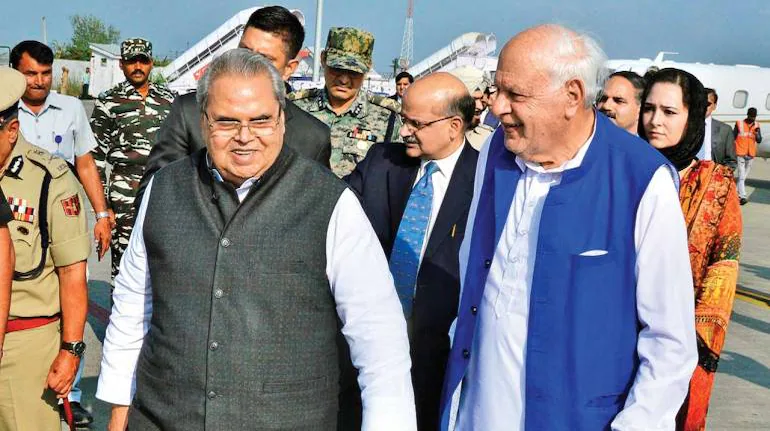 Jammu, Oct 21 (KINS) National Conference president Farooq Abdullah on Thursday rejected as “lies” former Jammu and Kashmir Governor Satya Pal Malik”s charge that he and his son Omar Abdullah were beneficiaries of the Roshni scheme. In a video clip that has gone viral, Malik is purportedly seen claiming that the Abdullahs and Peoples Democratic Party (PDP) chief Mehbooba Mufti had got plots of land under the Roshni scheme. Farooq Abdullah rejected Malik”s charge as lies. Malik, who was the governor of Jammu and Kashmir when Article 370 was abrogated, now holds the gubernatorial post in Meghalaya. Addressing his party workers here, Abdullah said, “First he (Malik) lied to us that Article 370 will not be scrapped. It will continue. Later he said that the prime minister had told him that only Article 35-A will be removed, and not Article 370. He tells lies.” Abdullah said that lies are being spread all over the country, including in Jammu and Kashmir. The Roshni Act was brought in by the Farooq Abdullah government with the aim of granting proprietary rights to occupants of state land in lieu of charges. The money thus generated was to be used for setting up hydroelectric power plants in the erstwhile state. However, the scheme was disbanded after the Jammu and Kashmir High Court declared it illegal and directed the CBI to investigate the beneficiaries of the scheme. In November last year, the Jammu and Kashmir administration named former chief ministers Farooq Abdullah and Omar Abdullah in a list of scheme beneficiaries and alleged a residential house in Jammu was built on illegally-possessed land. The Abdullahs have denied it. On some Jammu-based NC leaders quitting the party, Abdullah said such developments will not affect the party. “NC will never die…. Jammu and Kashmir will only be saved by the NC. The BJP and the RSS will be wiped out,” he said. ( KINS)