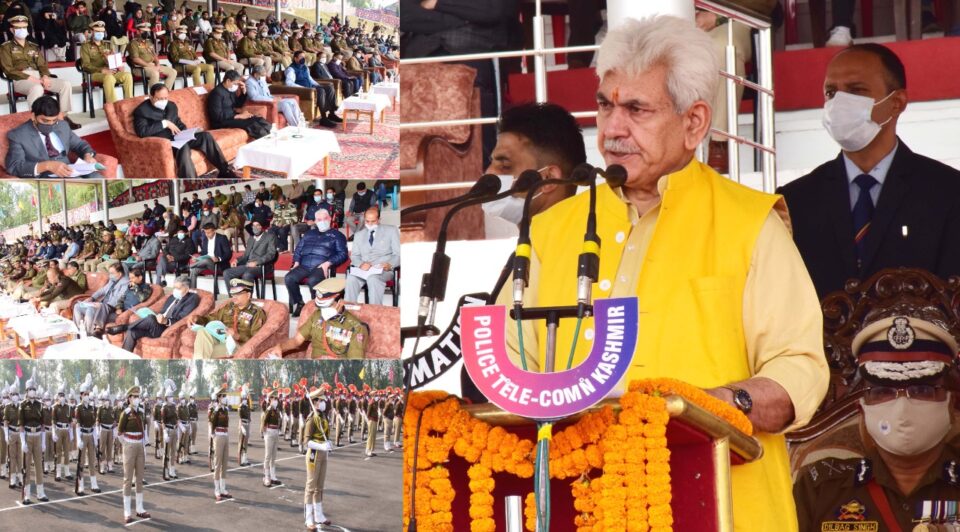 Speaking on the occasion, the Lt Governor paid tributes to the Police Personnel who have made supreme sacrifice in the line of duty.

Valour of brave-hearts of J&K Police and their unparalleled courage is an inspiration for all. From maintaining Law & Order to providing assistance in disasters & to being at the forefront during the Covid pandemic, J&K Police is dedicated to serve and secure the lives of the people of the UT, observed the Lt Governor.

Our valiant police personnel selflessly put their lives at stake, work 24X7 for ensuring a safe environment for the people of J&K. The nation will always remain indebted to their sacrifices, the Lt Governor added.

“Attempts are being made by the neighbouring country to disrupt the process of peace & development in J&K. Our brave Security Forces will neutralize every terror threat. We will strive to preserve the communal fabric of J&K and will not rest till terrorism is completely wiped out”, said the Lt Governor.

We are committed to peace, strengthening the social fabric & maintaining cultural harmony. Befitting reply will be given to the forces threatening sovereignty and integrity of the country,” added the Lt Governor.

The Lt Governor called upon the civil society, social & religious organizations to speak in unison to fight terrorism.

I salute the families of the martyrs and assure them that J&K Government will always stand by them. My sincere homage to the civilians who lost their lives in terror attacks, to the police personnel & frontline workers who laid down their lives while fighting Covid, said the Lt Governor.

As the entire country is celebrating Azadi ka Amrit Mahotsav, we must ensure stories of bravery and sacrifice of our policemen reach future generations and pass on the legacy of courage and valour, said the Lt Governor.

J&K Police is also entrusted with the responsibility of earning the trust of common people, protecting the unity and brotherhood in the UT. People must acknowledge the sacrifices made by our police and security personnel in ensuring a safer environment for them, he added.

Despite the conspiracies by the enemies, J&K is marching on the path of development, growth and prosperity. I believe that the police personnel who are working 24X7 have an important contribution in this developmental journey, the Lt Governor observed.

Terming Youth as the biggest asset of the future socio-economic growth, the Lt Governor asked the Police department for institutional mechanism to connect with the youth, spread awareness regarding various programmes under Mission Youth, through their Civic Action Program and encourage the younger generation to be an integral part of the nation building process.

The Lt Governor advised the police personnel to counter modern challenges through technology interventions and make policing more effective. The use of technology is the need of the hour to deal with the elements creating an environment of fear and insecurity in Jammu and Kashmir, he further added.

Dilbag Singh DGP J&K, while speaking on the occasion, paid homage to the martyrs of JKP and other forces.

Our police and security forces are working tirelessly to protect the J&K UT from enemies. Police is always there to serve people facing traditional as well as modern challenges, added the DGP.

GP J&K read out the names of Police personnel martyred in the last one year. Contingents presented Roll of Honour in the memory of the martyr Policemen. The arms are reversed and a two-minute silence is observed in the honour of the Martyrs.

Later, the Lt Governor handed over SRO Orders to the wards of the martyrs. A Blood Donation Camp was also organized on the occasion.

Pertinently, the Commemoration Parade is observed every year on October 21 as a mark of respect and remembrance of martyrs, who laid down their lives in the line of duty.