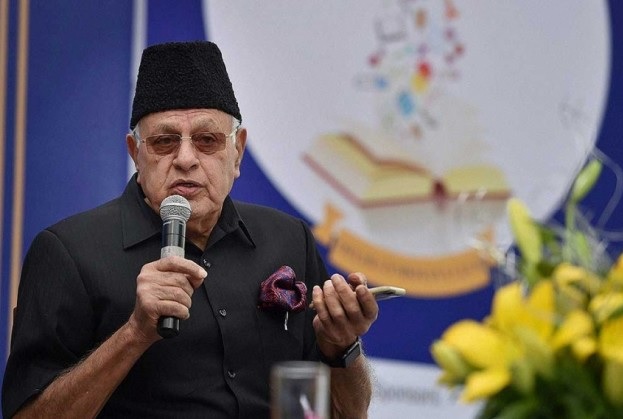 JAMMU OCT 22 ( KINS)- Jammu & Kashmir National Conference President Dr Farooq Abdullah on Thursday expressed concern over polarizing atmosphere for political gains, especially in the run up to elections, saying this menace has to be fought to make a strong and united India.

Atmosphere of communal divide and generating passions is not a conducive trend in politics,” Dr Farooq Abdullah said while addressing the party functionaries and workers at Sher-i-Kashmir Bhavan, Jammu here.

Today they are playing communal politics in view of the elections in Uttar Pradesh, he said that hate is being spread here as well by those who just chant ‘Jammu, Jammu, Jammu, Jammu’.

“Jammu and Kashmir will remain a singular entity. Jammu is the gateway to Kashmir and Valley as a gateway to Ladakh. Attempts of sowing hate in Jammu have been made since 1947 but the perpetrators will not succeed. Those trying to generate a wedge will lead to balkanization of the country,” he added.

He said if the ray of secularism from J&K generated a ray of hope during horrendous times decades ago there is no reason why today’s challenges can’t be met now. He exhorted the cadre to renew their pledge of strengthening cherished philosophy of secularism that guided the destiny of the people in this part of the country under the banner of National Conference over the decades. He also exhorted the cadre to assert their designated role in strengthening the bonds of harmony, amity and brotherhood, bequeathed by Sher-e-Kashmir Sheikh Mohammed Abdullah, who rejected two nation theory during the most difficult phase of the history.

The NC President exhorted the workers to meet the challenge and fight the communal forces. The National Conference has a chequered history of fostering brotherhood and foiling the divisive forces, he said.

Referring to soaring prices of essentials and the fuel, Dr Farooq Abdullah reminded the Prime Minister of his tirade against fuel prices when they were in the opposition. Now that the prices are touching skies, nothing is being done, as a result of which poor people stand pushed to the wall. He said the hike in fuel prices has escalated rates of all the essentials and the brunt is being borne by the poor.

Dr Abdullah lashed out at the Centre for muzzling the media, saying fear psychosis has been created as a result of which the media persons are fearful of objective reporting. He said the day is not far when the media will be in a position to report fearlessly.