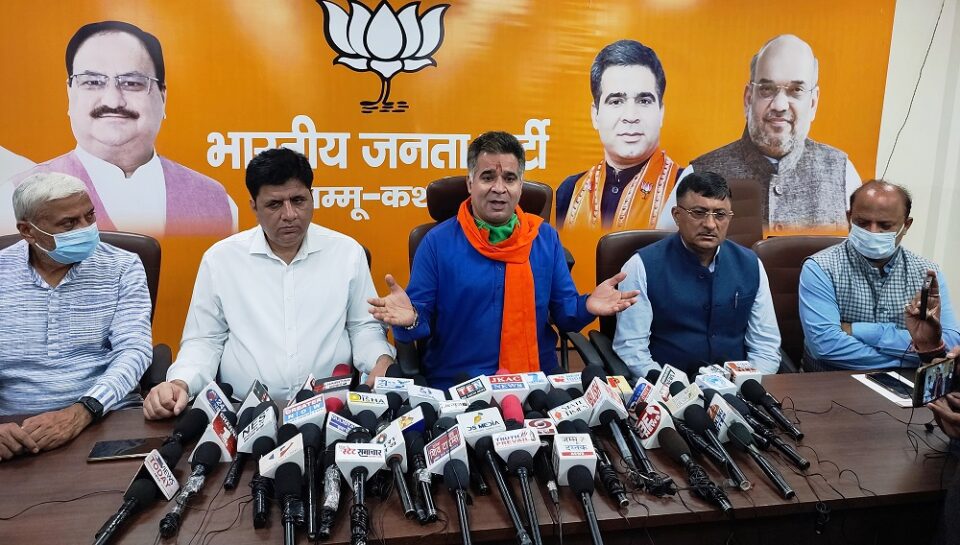 Jammu , Oct 22 ( KINS) When the whole world was struggling and was clueless in the fight against Covid-19 Pandemic, India robustly emerged as a world leader under the dynamic leadership of Prime Minister Narendra Modi, said J&K BJP President Ravinder Raina.

Ravinder Raina while addressing the media persons said that India has created history under the leadership of Prime Minister Narendra Modi. India is being hailed all over the world when the 100 crore corona vaccine figure is crossed and for this landmark achievement Bharatiya Janata Party is heartily grateful to the frontline Corona Warrior especially doctors and paramedical staff and all the health workers, who saved the fellow citizens of this country from the deadly corona virus infection by working dedicatedly keeping their own & their family members at risk of infection.

Raina added that in the whole fight against the deadly infection, India under the leadership of PM Modi not just successfully contained infection in India but also helped the whole world with the supply of vaccines etc. which gained the Nation the title of world leader.

“A history has been created today, with this 100 crore vaccine mark within a short span of time. PM Modi guided the citizens of the Nation of all the precautions and essential steps to be taken to fight the infection. The task force to fight the infection was being monitored by the PM himself. Special hospitals were created within record time. Oxygen shortage was managed excellently. For this, doctors, paramedics are to be thanked. All social workers, those who arranged langars, medicines etc., our business & trader fraternity, religious & social groups, our public representatives and all those who contributed in PM CARES funds are to be thanked.”, Raina said and at the same time appealed that the Corona has been controlled presently but it has not been eradicated and so have to keep all the Covid protocols in mind.

Raina said that BJP has emerged as a reckoning force and strongest political party in the whole J&K. BJP has taken the lead in every election held recently in the region. Along with Jammu, now BJP has ensured its niche in Kashmir as well. All the leaders have now understood that they can serve the Nation in BJP only. After the elections BJP is going to form its Chief Minister with absolute majority. NC and PDP are now devastated with their leaders now leaving their parties, he added.

Raina also said that Indian forces have been given a free hand to eliminate terrorists by the Modi government and in the past few days terrorists in high numbers are neutralized.( KINS)