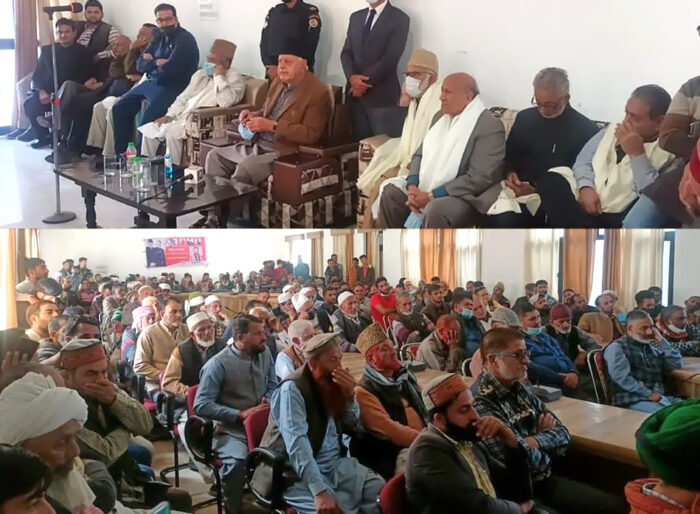 Jammu , Oct 26 ( KINS) – National Conference President Dr Frooq Abdullah today exhorted the cadre to gear up for the challenges facing Jammu and Kashmir, cautioning to maintain vigil against the elements inimical to religious harmony and unity.
“Enemies of people in general and National Conference in particular are spreading hate to divide the society, which has withstood all these machinations with courage and fortitude in the past”, Dr Farooq Abdullah said while addressing a big rally at the border township of Surankote this afternoon.
General Secretary Mr Ali Mohammed Sagar, Provincial President Mr Rattan Lal Gupta and senior leader Syed Mushtaq Ahmed Shah Bukhari also addressed the people.
Besides Additional General Secretary Dr Sheikh Mustaffa Kamal, Khalid Najeeb Suharwardhy, Mr Mushtaq Guroo and other senior leaders were present on the occasion.
To achieve the objective of strengthening bonds of brotherhood, he asked the cadre to further intensify their mass contact, fan out in their areas and generate awareness among the people against divisive agenda of disruptive forces, which are exploiting the sentiments of the people on the basis of religion and region. He said all religions preach love and harmony and if there is any problem it is with the self seeking politicians who play communal cards to further their political agenda.
“There is no threat to any religion and if there is danger to anything at all, it is the politics of hate, which has been serving as a shield to communal elements”, he said adding that the politics of mistrust and suspicion will take a toll on the nation. He asked what sort of the message they are conveying to the nation, which is a beautiful vase of different flowers. He cautioned that the attempts of communal polarization will weaken the fabric of the Indian nation. He asked the believers of hate-politics to keep off from Jammu and Kashmir, which is a shining example of amity and communal harmony.
Dr Farooq Abdullah said that attempts of dividing the people of J&K are not new as this has been happening for decades. But the people have always given a befitting reply to these forces, he added.( KINS)

Model Code Of Conduct By 1st Week Of March; Transfers Of DCs & SPs In J&K

JKAP to press for an early hearing in a petition challenging Abrogation of Art 370, Art 35-A in SC