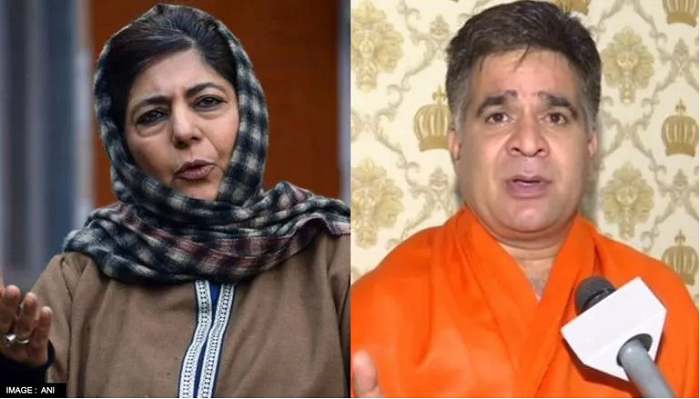 Jammu , Oct 26 ( KINS) Jammu and Kashmir Bharatiya Janata Party (BJP) President Ravinder Raina attacked PDP Chief Mehbooba Mufti on Tuesday, accusing her of having a “Talibani mindset” for questioning rage against Kashmiris for celebrating Pakistan’s T20 World Cup victory over India on Sunday. He went on to accuse Mufti of “committing a sin” by supporting Pakistan.

Following India’s T20 World Cup match with Pakistan, Mufti expressed her support for Kashmiri students who were allegedly beaten up by a group of students in Sangrur, Punjab, for allegedly cheering Pakistan’s victory. Raina said, “Mehbooba Mufti has a Talibani mindset and she has committed a sin by extending her support to Pakistan, our enemy, who sends terrorists into the union territory and makes it bleed. Some people live in India, eat-in India but their hearts beat for Pakistan. She should answer this. Anyone conspiring against India will be crushed and bulldozed.”

Mufti on Tuesday tweeted, “HMs Mann ki Baat with Kashmiri youth started with slapping UAPA against medical students for celebrating Pakistan’s win. Instead of trying to ascertain why educated youth choose to identify with Pakistan, GOI resorting to vindictive actions. Such steps will alienate them further.”

Earlier, she had stated, “Why such anger against Kashmiris for celebrating Pak’s win? Some are even chanting murderous slogans- desh ke gadaaron ko goli maaro/calling to shoot traitors. One has not forgotten how many celebrated by distributing sweets when J&K was dismembered & stripped of special status.”

Following the India-Pakistan T20 World Cup match on Sunday, Kashmiri students at an engineering college in Punjab’s Sangrur were allegedly attacked by a mob of students. Following Pakistan’s victory over India in the T20 World Cup match, a few college students, purportedly from Uttar Pradesh, went on a rampage and allegedly vandalised the Kashmiri students’ hostel rooms. The footage of the fight went viral on social media.

Also, the Jammu and Kashmir Students Association strongly condemned the attack on the students on Monday, and in a statement, the Association’s spokesperson, Nasir Khuehami, requested Punjab Chief Minister Charanjit Singh Channi to take action against the perpetrators and provide security to Kashmiri students studying and working in the Punjab state.( KINS)