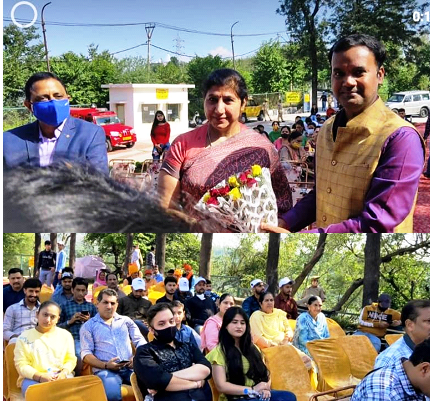 JAMMU, OCT 27 ( KINS): The serene environs of Mahamaya neighborhood today buzzed with activity as a huge number of visitors thronged the area to be part of a special event organized by Directorate of Tourism Jammu and Jammu and Kashmir Cable Car Corporation to promote Bahu-Mahamaya-Peerkho Gondola ride.

The event organized as part of the Iconic Festival Week witnessed a scintillating cultural programme featuring folk music and dance by local cultural troupes and the   artists of J&K Academy of Art, Culture & Languages.

Deputy Mayor Jammu Municipal Corporation, Purnima Sharma was the Chief Guest and Vikas Gupta, Director Handloom and Handicraft was Guest of honour on the occasion.

Addressing the gathering, Chief Guest said that the motive of holding Iconic Festival aims at attracting maximum tourist footfall and to promote potential tourism destinations in each district and city of Jammu and Kashmir. She said Jammu city with its rich heritage and culture can act as a nerve center to attract   tourists and divert them to other potential destinations of the region.   “Bahu-Mahamaya-Peerkho Gondola ride has added another tourist attraction to the City of temples which needs to be widely promoted”, she added.

Talking to Media persons, Director Tourism, Vivekanad Rai said that the objective of the iconic week festival was to showcase the varied tourism potential of Jammu region.

Stranded vehicles allowed to move towards Kashmir on Srinagar-Jammu highway