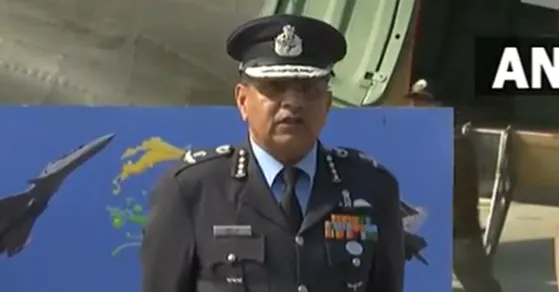 Srinagar, Oct 27 ( KINS): The nation Wednesday is commemorating the 75th Infantry Day which is marked to remember the first military event of independent India, wherein the Indian armed forces repelled Pakistan’s attack on October 27, 1947, in the Kashmir Valley.

Speaking on the occasion, Air Marshal Amit Dev, AOC-in-C, Western Air Command, expressed confidence that the Pakistan-occupied Kashmir will one day become a part of India. He added that if the United Nations had not intervened in 1947, then the entire Kashmir would have been ours.

“On this historic occasion, on 75 years of Budgam landing, in which after the Instrument of Accession was signed, we moved in quickly our troops. Srinagar airfield was saved and thereafter we could launch a further offensive and push the Pakistan military, which came as kabailis, further back,” Air Marshal Amit Dev said.

“I am sure, if the UN had not intervened, perhaps the entire Kashmir would have been ours. It was not only IAF and Army’s participation in Budgam but there have been many small missions that have resulted in ensuring the freedom of free Kashmir. I’m sure someday PoK will join this part of Kashmir and we’ll have whole Kashmir in years to come,” he added.

Earlier today, the Indian Air Force remembered vintage aircraft ‘Parashurama’ — one of the refurbished Dakotas that had played an important role in the transportation of troops of the 1st Sikh Regiment to Srinagar during the 1947 war with Pakistan.

“Marking a significant landmark in India’s military history by commencing induction of troops in defence of Kashmir valley, Dakotas of No.12 Sqn of then RIAF landed the 1st boots on the ground- 1 Sikh, Indian Army-at Srinagar on 27 Oct 1947. This day is marked as the Infantry Day,” the IAF tweeted.

“The crucial airlift spearheaded sustained air ops in support of Indian Army and civil effort during the war. One of the Dakotas VP905 was refurbished and gifted to IAF later. The aircraft, christened Parashurama, now proudly flies with IAF Heritage Flight,” it added.

In Jammu and Kashmir, Lt Governor Manoj Sinha dedicated a war memorial ‘Saviours of Kashmir’ at the Srinagar International Airport. The memorial commemorates the arrival of the Indian Army in Indian Air Force aircraft, at Srinagar Airport in 1947.( KINS)

SMC employees strike enters 3rd day, Strike not in favor of anybody: Employees

One year after abrogation of Article 370, no end to killings in Kashmir