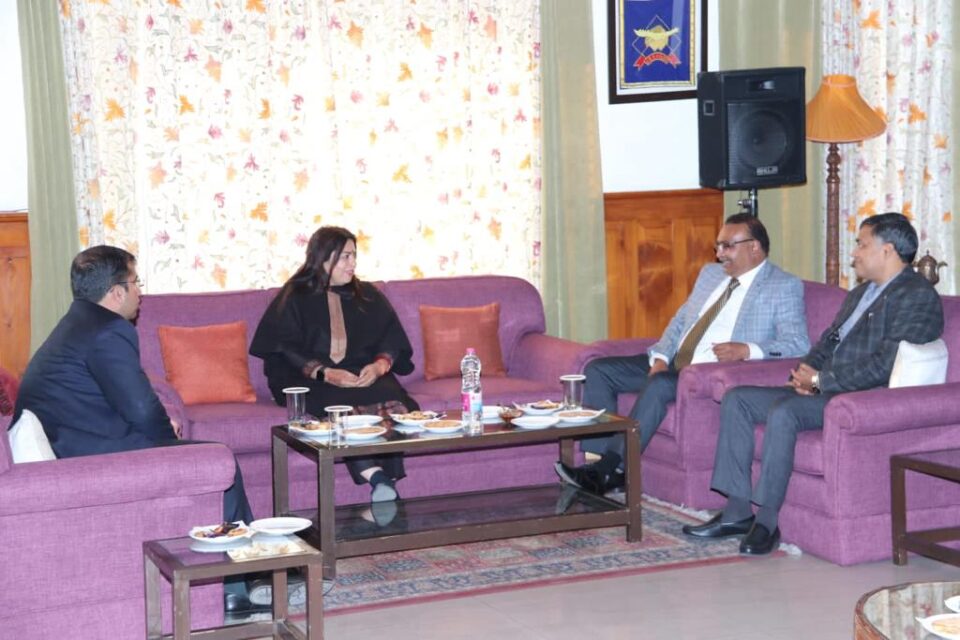 Srinagar, October 27 ( KINS); Union Minister of State for External Affairs and Culture  Meenakshi Lekhi who was on visit to Kashmir as  part of outreach programme of Government of India today interacted with DGP J&K and others Police Officers at GOs Mess Humhama.

The visiting Minister while interacting with the officers said that she shared a special relationship with the UT of J&K and Police as she comes from a family who served in the police department for three generations .

The Minister while interacting with the lady officers said that it is fascinating to see the women sharing spaces of public offices and responsibilities with the male counter parts in  building of the nation.

She said that her Ministry will try to develop religious and heritage tourism in UT so that tourists in large numbers are attracted towards the religious and spiritual places here. She said that Mata Vaishnu Devi Shrine is shining example of attracting religious tourists to the UT. She added that on the same lines some more tourist circuits can be developed and promoted.

The Minister also highlighted the importance of preservation of Culture and cultural symbols. She said that Kashmir had a rich cultural heritage of being a learning place in the Indian sub continent.

On the occasion the DGP gave an insight into the security scenario in J&K and said that from last three years the peace and progress have been moving forward together and peaceful environment have brought dividends to the people who have contributed in a big way in our peace building efforts. Law and Order and security situation has shown a marked improvement in all respects with least loss of life and property. incidents in the valley.There is no street violence and the favourite Bandh Call culture of separatists has ended almost completely. He informed that the changing environment has upset the Pak agencies and their proxies and recent innocent civilian killings is indicating of their frustration with people’s partnership in peace and progress and communal harmony.

The DGP said that such elements shall not be spared and stringent measure shall be taken to defeat their nefarious designs. He said peace, harmony and brotherhood among the people living here shall be safeguarded and added that J&K Police alongwith the security forces are working in a

Well coordinated manner to foil these evil attempts.  He also briefed the Minister regarding various initiatives of Jammu and Kashmir Police in engaging the youth in positive activities.

The Minister paid her tribute to the uniformed persons who are working hard to protect our people and nation from evil eye under difficult circumstances.(KINS)

A govt teacher who donates her salary to assist poor students

Government to allow local purchases in GeM
Local entrepreneurs, manufacturers, and suppliers to get preference
Another major announcement to boost the local economy by increasing the marketability of goods and services provided by local businesses