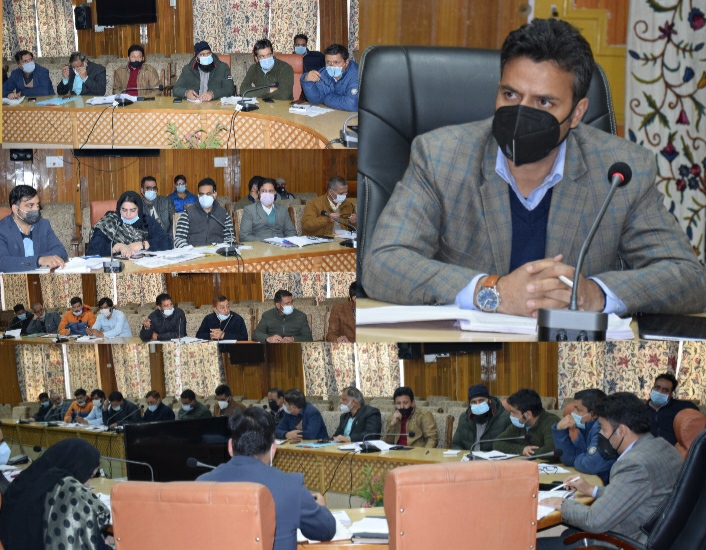 At the outset, the DDC directed all officials to ensure that targets under CSS schemes are achieved as per projected timelines. He briefed the officials that the aim of these schemes is to extend benefits to the people and to ensure complete utilization of funds for development of the district.

The DDC directed for resolution of impediments in implementation of the schemes and assured full support of district administration to the implementing departments.

He laid stress for expediting registration process under Ayushman and SEHAT scheme and it was also informed that so far 2.33 lac beneficiaries have been registered in the district.

Officers from health informed the chair that under JSY, free medicine and free diagnostic checkups to pregnant ladies are being provided

While reviewing the implementation status of Social Welfare schemes, it was given out that under National Social Assistance Programme pendency has been cleared and now only non seeded cases are pending and issue has been forwarded to administrative departments.

During the meeting it was also given out that under SAKSHAM, 31 cases out of 54 cases have been sanctioned.

The DDC directed the concerned to take up matter of pendency with the administrative department and inquire the reason for delay.

Regarding Pre Matric Scholarships it was informed that applications are being received and cases will be processed.

The DDC stressed that benefits be disseminated to all eligible students. He also outlined the need for de-weeding ineligible beneficiaries if any.

Authorities from education informed that under SAMAGRA, 159 civil works have been completed while some new works are under tendering process. Few works are held up due to nonavailability of land and under Mid Day Meal, Dry ration distribution till September has been completed and funds have been transferred to student accounts through DBT mode.

While reviewing implementation status in the Agriculture Department, it was shared that 98 percent registration has been uploaded and verified; besides, verification for the pending candidates is being completed. 55000 people have already received the first installment under the scheme.

The DDC directed the department to provide a detailed list of pending beneficiaries and address technical issues at the earliest.

It was also given out during the meeting that 70535 Kisan Credit cards have been distributed among the beneficiaries and loans for purchase of machines, fertilizers, spraying equipment, etc have been taken on these cards.

The DDC directed officials from agriculture and horticulture to ensure that dissemination of benefits is expedited. He laid stress on the importance of these departments as agriculture and horticulture constitute the backbone of the economy of the district. He inquired regarding assessment of damages due to the recent snowfall and it was informed that the assessment will be completed within days.

CAO informed the meeting that the nationwide artificial insemination program 3rd phase is underway and 1.10 lac AIs have been completed under each phase.

CSHO informed the chair that Sheep units have been established and vaccinations have been completed in the district.

AD-Fisheries added there was 40 metric tons fish production last year and this production is expected to be 60 tons this year. Whereas, 2, 40,000 seeds have been distributed among beneficiaries.

The DDC also passed directions to the R&B and PMGSY authorities to complete ongoing works before the onset of winter season.