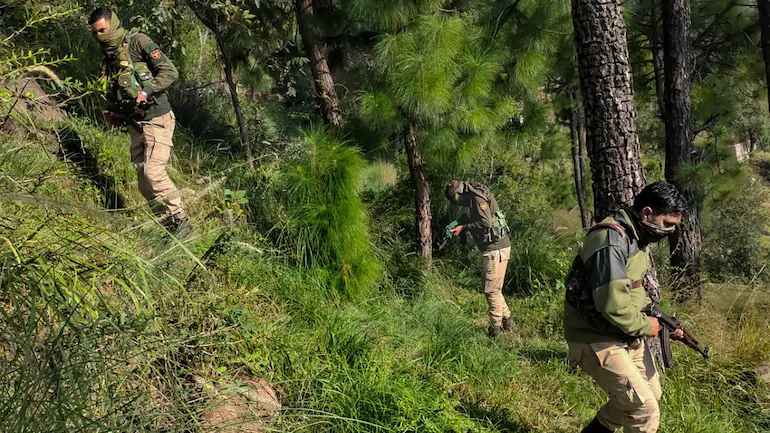 Poonch, Oct 30 ( KINS) A search operation to track down a group of hiding militants  entered the 20th day on Saturday in the forest belt of Jammu and Kashmir’s twin border districts of Poonch and Rajouri, where nine soldiers were killed in two separate attacks, officials said.

The operation in Bhatti Durrian in Mendhar along with Surankote forest in Poonch district and nearby Thanamandi in Rajouri started on October 11, they said.

A Pakistani militant , who was moved from the Kot Bhalwal Central Jail in Jammu to Mendhar on police remand for questioning in connection with the ongoing operation, was killed when the security forces accompanying him to identify a hideout came under fire from hiding militants  on October 24.

The contact with the hiding militants  was only established twice on October 11 at Surankote and Thanamandi and again at Bhatti Durrian on October 14, resulting in the killing of nine security force personnel, including two Junior Commissioned Officers (JCOs). Five of them were killed in Surankote and four in Mendhar.

After the firing on October 24 in Bhatti Durrian which left the Pakistani terrorist killed, there was no contact with the hiding militants  even as a massive joint search operation by the army and the police continued and a hideout was busted leading to the recovery of an AK assault rifle, some ammunition and other articles such as food, blankets and shoes.

An army officer said there was no breakthrough against the holed-up militants  who are avoiding direct contact with the search parties and are on the run taking advantage of thick foliage, natural caves and difficult terrain.

The entire forest area is under tight security cordon and the operation to neutralise the militants  is going on, the officer said.

The officials said smoke was seen billowing from deep inside the forest at a few places after dry grass caught fire during the ongoing operation. The fire, however, was put off by the search parties.

Over a dozen persons, including two women, were detained so far for questioning after it came to light that they allegedly provided logistic support, including food and shelter, to the militants , the officials said.

Meanwhile, traffic between Bhimber Gali and Jera Wali Gali in Mendhar along the Jammu-Rajouri highway remained suspended as a precautionary measure for the 15th day on Saturday in view of the ongoing operation.

Rajouri and Poonch in Jammu region have witnessed a rise in infiltration attempts since June this year, resulting in the killing of nine militants  in separate encounters.( KINS)

Minor killed, another injured as Kitchen collapses in Poonch