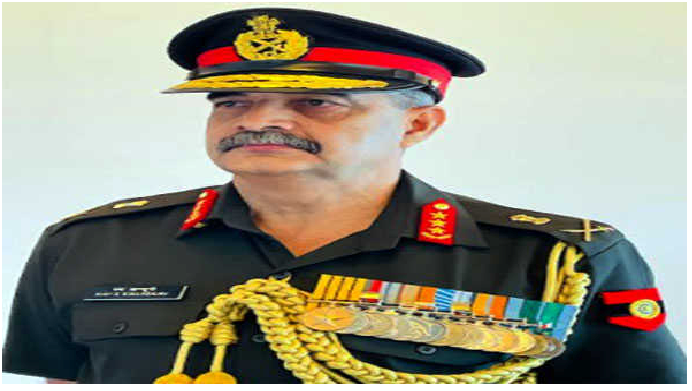 Jammu, Nov 1 (KINS) Lieutenant General Nav K Khanduri on Monday assumed the charge of GOC-in-C, Western Command.
The defence spokesman said that he has the distinction of being the first Air Defence Officer to be appointed as an Army Commander.
On assuming the appointment of Army Commander, Gen Khanduri laid wreath at Veer Smriti paying homage to the brave hearts, who have made the supreme sacrifice in the line of duty.
A Guard of Honour was also presented to him at the Western Command Headquarters.
An alumnus of Rashtriya Indian Military College, Dehradun and the National Defence Academy, Khadakwasla, the General Officer passed out with 73rd Regular Course from the Indian Military Academy, Dehradun and was commissioned into 27 Air Defence Regiment (Amritsar Airfield) on Dec 17, 1983.
He is an alumnus of the prestigious Defence Services Staff College, College of Defence Management and the National Defence College.
In a career spanning over 38 years, Gen Khanduri has served across a wide spectrum of operational areas and has tenanted a host of important Command, Staff and Instructional appointments. The General has the unique distinction of commanding an Air Defence Brigade in Operation “Rakshak” and later a Mountain Brigade in Operation “Falcon”. ( KINS)

Aim to bring down transformer failure rate by 15% this year: Kansal

Resolve our genuine demands else we approach court: Secretariat employees to govt