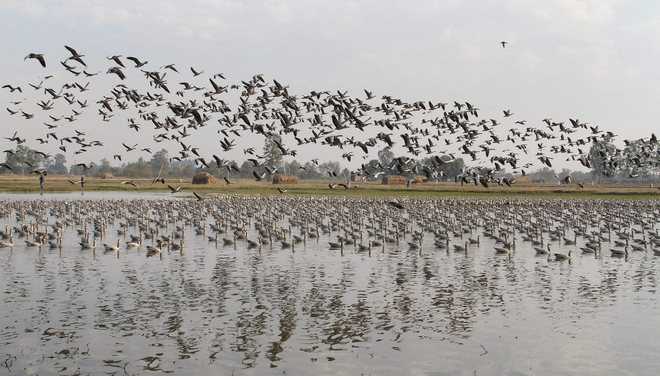 Srinagar, November 1  ( KINS) : Keeping their tryst with Kashmir, more than four lakh migratory birds of different species have already arrived in the wetlands to spend winter months. Every year, migratory birds come to Kashmir through the central Asian flyway zone including Siberia, North China and north Europe to ward off the extreme cold of their summer homes. These birds live from late October to the end of April in the comparatively lesser cold environs of the Valley as their summer homes remain frozen during the winter months. Bird migration is a science that has taught humankind the basic rules of navigation. It is the eldest bird that leads the flock during the to and fro journey from the summer homes to the winter homes. Normally, the oldest bird, well acquainted with the thousands of miles long route, is the flock leader. In case of the death of the oldest bird, the next in age and experience takes over the flight typically like the present day co-pilot of an aeroplane.

“In addition, there are 20,000 birds in Chatlum, 30,000 in the Wular Lake, and over a lakh in the Dal Lake in Srinagar.” The wildlife warden said the migratory bird species that have arrived here so far include mainly geese, mallards, pochards, gadwals, pintails, waders, coots and the common teals. Talking about the water management inside the bird reserves, he said, “In Hokersar reserve, water is at present regulated to the optimum. “We have no issues with regard to water management in Hygam while in the Shallabugh bird reserve water management and regulation is under progress. “In Pampore wetlands of Pulwama district we are comfortably placed with regard to water management. Similarly, the Wular lake and the Dal lake are naturally fed and drained water bodies.” Asked about the threat of poaching in these wetlands, the warden said, “Inside the bird reserves like Hokersar, Hygam and Shallabugh, where permanent staff of the department is posted round the clock, we have no threat of poachers. “Poaching becomes a problem in unprotected, isolated wetlands. “During surprise visits to such unprotected wetlands, whenever stray incidents of poaching have come to our knowledge, we have seized weapons of poachers and taken other legal actions against such offenders”.

Shooting of migratory birds became an offence under the local laws enacted in 1978 which were repealed and replaced by the Indian wildlife protection Act 1972 when Article 370 was abrogated and J&K downgraded into a union territory. Kashmir has been known for its myriad avian visitor species those bear plumages of various colours adding a kaleidoscopic view to the otherwise colourless, barren winter landscape. The cackle of the migratory birds on a clear night sky or in villages close to the local wetlands has historically prompted parents and grandparents to tell their children the grand stories of Kashmir’s enviable past.( KINS)

Man who crossed over to PoK repatriated