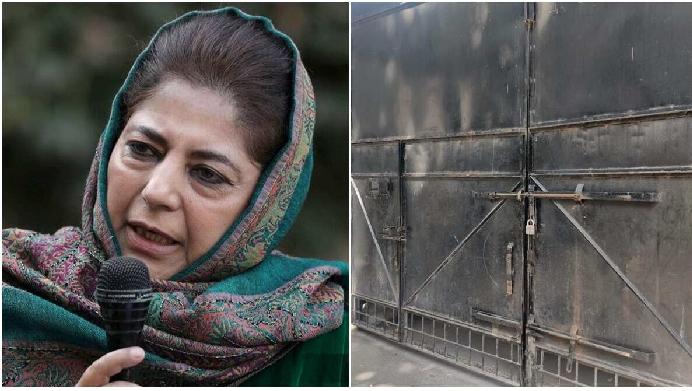 SRINAGAR, Nov 1 ( KINS): PDP president Mehbooba Mufti was on Monday put under house arrest to prevent her from visiting Anantnag to meet the family of a youth who was killed in cross-firing between security forces and militants last week, a party leader claimed.

The Peoples Democratic Party leader claimed that the police have locked the main gate of Mehbooba’s house.

A police official said the PDP chief was not allowed to visit Anantnag due to security reasons.

Shahid Ahmad was killed in an exchange of fire between Central Reserve Police Force (CRPF) personnel and militants in Shopian district on October 24, according to police.

Mehbooba was put under house arrest at her Fairview residence in Gupkar locality of the city here and not allowed to move out, the PDP leader claimed.

She was to visit the family of slain youth Shahid Ahmad in south Kashmir’s Anantnag district. She wanted to offer her condolences to the bereaved family, but was not allowed to move out of her residence, the party leader said.

According to the PDP leader, the police have locked the main gate of Mehbooba’s house. A police vehicle has been stationed just outside the gate to disallow any movement.

Ahmad’s death had evoked strong reactions from mainstream political parties in the Valley and they had demanded a probe into it.

Mehbooba had said it was sad that the armed forces “operate with such impunity” in Kashmir. ( KINS)