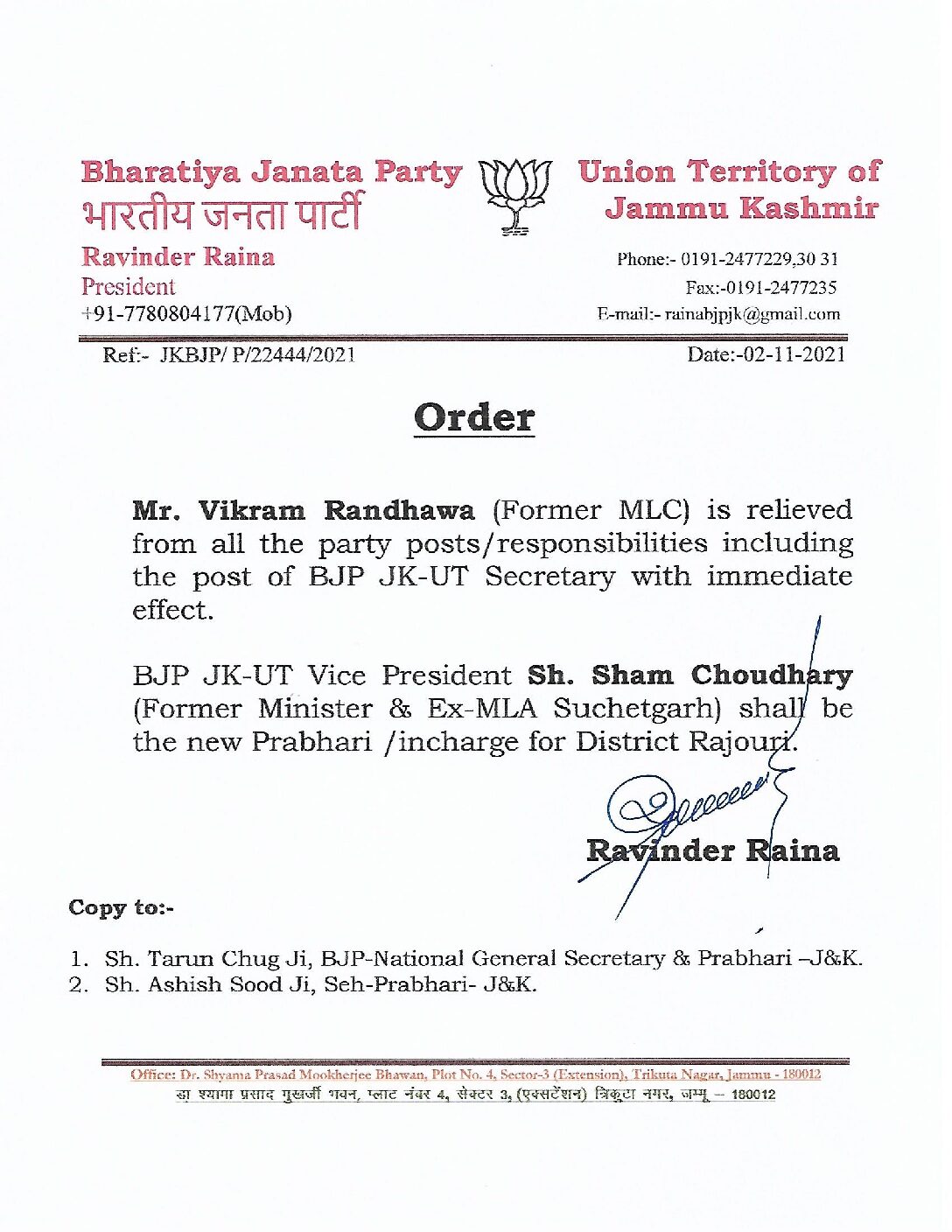 Jammu , Nov 2 ( KINS) A senior Jammu and Kashmir BJP leader has been booked for allegedly hurting the religious sentiments of a community through his remarks, prompting the party to relieve him of all his responsibilities including the post of J&K secretary. An FIR has been registered against former MLC Vikram Randhawa after a video surfaced online purportedly showing him making ”disparaging” comments over the incidents of celebration of Pakistan’s win over India in a T20 world cup cricket match. ”An FIR has been registered against Randhawa at a police station here under section 295-A and 505 (2) of the Indian Penal Code and further investigation is on,” a police official said.

Section 295-A pertains to deliberate and malicious acts intended to outrage religious feelings of any class, while section 505 (2) gives powers to the police to arrest anyone who makes a statement which creates or promotes enmity, hatred or ill-will between classes.

In a communication, J&K BJP president Ravinder Raina said, ”Randhawa has been relieved from all the party posts/responsibilities including the post of JK-UT Secretary with immediate effect.” The order said BJP JK-UT vice president Sham Choudhary, a former minister, would be the new incharge for district Rajouri in place of Randhawa. The party’s Jammu and Kashmir unit had taken note of the video and served Randhawa a showcause notice on Monday, asking him to submit a public apology.

In the notice, the BJP disciplinary committee, headed by Sunil Sethi, also asked him to explain his position within 48 hours. ”A video has gone viral in social media in which you are seen making absolutely reckless and hatred-promoting remarks against a particular community. This is unacceptable to the party and has brought disrepute and embarrassment to the party,” the notice read.

The BJP Jammu and Kashmir president, who ordered the disciplinary action against the former legislator, had said he was personally hurt after hearing the comments of Randhawa.

He said the remarks ”are totally against the basic principles of the party which believes in respecting all faiths and taking everyone along in accordance with Prime Minister Narendra Modi’s slogan of ‘Sabka Saath, Sabka Vikas and Sabka Vishwas’ (inclusive development)”.

Randhawa’s remarks caused outrage across Jammu and Kashmir with people demanding action against him in accordance with the law.

National Conference vice president Omar Abdullah has said, ”So good to see this man making friends with Kashmiri people! He should be made an example out of and the law should deal with him firmly to dissuade others from being as abusive as this man has been.” BJP spokesperson Sunil Sethi said the disciplinary committee has given an interim report in view of the huge impact of reckless statement of Randhawa and the bad name it has brought to the party. He said the report has recommended to immediately relieve him of all official party positions pending finalising of disciplinary proceedings.

”Party President Ravinder Raina agreed with the report and decided to take strict and strong action against Randhawa without wasting any time as party believes in respecting all religions particularly women. ”And it is unacceptable to party that a person occupying high position in party may makes statement which will hurt religious sentiments of anyone,” Sethi, who is also chairman of the three-member disciplinary committee, said in a statement.

He welcomed the registration of the FIR against Randhawa.(KINS)

Ammunition recovered from hideout in Reasi