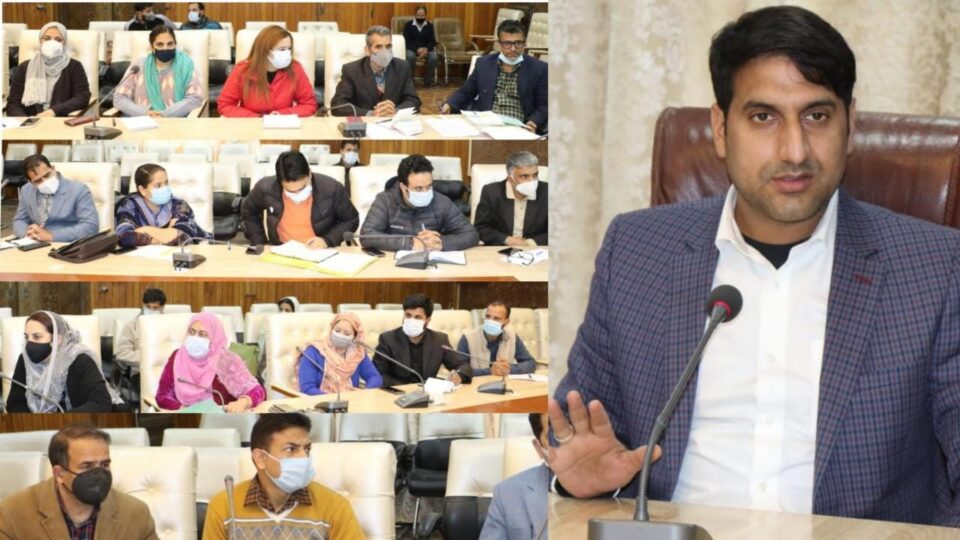 On the occasion, threadbare deliberations were held on present status and achievements made with regard to implementation of AB-PMJAY-SEHAT in Srinagar district.

The meeting also discussed in detail the modalities for speeding up the registration for SEHAT scheme and directions were passed on to all the concerned to achieve the target of registration of beneficiaries under the scheme in their respective areas.

The DC was informed that till date 376693 individuals have been registered with Ayushman Bharat in Srinagar district. There are 1.10 Lakh families who have at least one family member registered under the scheme.

The DC directed for creating a special cell under the supervision of ADDC for monitoring the progress of PM-JAY Sehat registration Medical Zone wise on a daily basis so that the set target is achieved at the earliest for the benefit of the beneficiaries.

The DC also directed the concerned authorities to start Information Education and Communication (IEC) activities by roping in all concerned departments for creating mass awareness in the district for speeding up registration process. He also called for utilizing the services of the Asha and Anganwari Workers in mobilising the public for the registration process.

He further directed the officers to organize Golden Card Registration Camps in all Tehsil and Nayabat offices in the district to ensure that cent percent population is covered under the scheme.

Highlighting the benefits of the scheme, Asad said that AB PM-JAY SEHAT Scheme is one of the most ambitious schemes launched by the Government to provide free of cost Universal Health Insurance Coverage up to Rs. 5 lakh per family on a floater basis in convergence with Central Government’s Ayushman Bharat Pradhan Mantri Jan Arogya Yojana (AB-PMJAY).