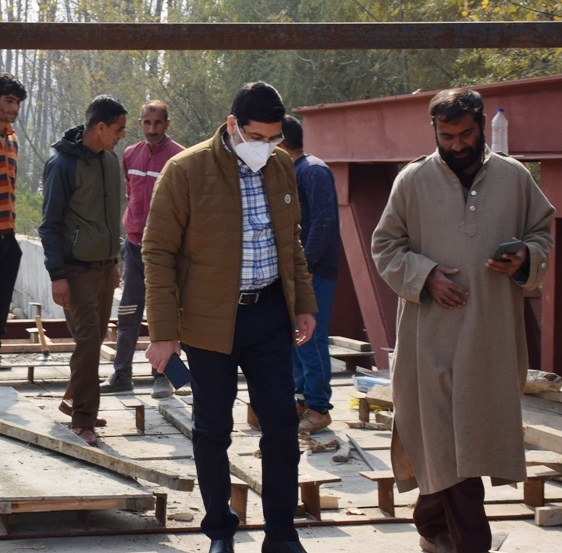 The DDC was accompanied by all concerned District/Sectoral officers who attended the public interaction programme.

En-route to the venue, the DDC inspected the ongoing work on two bridges situated at Narbal connecting Gotapora and other areas.

During the inspection, the DDC was apprised that these 2 bridges being constructed at a cost of Rs 4.62 Cr and 4.00 Cr respectively through R&B Budgam are in the last stages of completion process.

Mirza instructed the concerned to ensure that remaining work on connecting approaches and laying of remaining concrete slab on bridge is completed on fast track mode, keeping in view the impending weather conditions. The DDC was apprised that within next 15 days both the bridges shall be made functional.

The DDC held a public interaction programme at Govt Girls Middle School  Mazhama where apart from locals, various deputations from other adjacent villages  including Kawoosa, Kanihama Narbal ,Check Kawoosa and Gotapora had assembled to apprise the visiting administrative team about various  issues/demands  relating to improvement in power and water supply , improvement  in LT, HT Lines in affected areas, repair and renovation of NTPHC Centre at Mazhama.

The DDC gave patient hearing to all concerned and said that all genuine demands, issues and grievances shall be taken up on priority.

He reiterated that his top most priority and focus shall be to initiate the process retrieval of all encroached Govt.  Land, and added that strict directions will be issued to penalize any offender involved in such unlawful practices. He further said that a special drive shall be launched in the area equally coordinated and supported by all concerned departments/ agencies.

While commenting upon scarcity of water in area, the DDC said that under Jal Jeevan Mission (JJM),  20 moderate and  high capacity new water supply Schemes will be launched in the twin blocks of Narbal and Magam involving an amount  of Rs 8.75 Cr in next one and half year.

There shall be revolutionary change in the drinking water supply in the area under JJM, the DDC said.

He assured that other issues have already been taken note of by all concerned departments and simultaneously redressal process of issues will commence forthwith as per the nature and status of demands. ( KINS)

Athar Balpuri accorded warm and affectionate farewell on his retirement