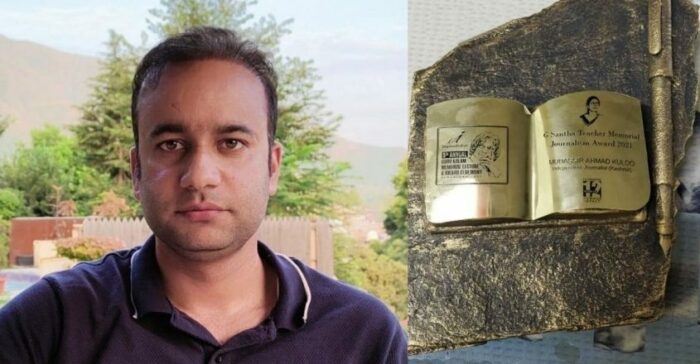 The award will be presented on November 6 in Bengaluru, during the 5th Guru Kalam Memorial Lecture, an annual national event being organised by the IIF to commemorate the birth anniversary of former President Dr APJ Abdul Kalam. The IIF spearheads several missions of Dr Kalam in association with Dr APJ Abdul Kalam International Foundation, Rameswaram.

This year the award carries a specially-crafted stone memento made by noted mural artist MS Chandramouli from Karnataka in addition to Rs 25,000 as a cash component.

The 2021 jury included aerospace and defence scientists, writers, teachers and activists in addition to the trustees of IIF. Mudassir was chosen from a list of three shortlisted Indian journalists.

Mudassir pursued his Masters in Mass Communication and Journalism from University of Kashmir and has been a Senior Correspondent with The Kashmir Monitor for six years.

His reports have also featured in The Third Pole, TRT World, First Post, The Tehelka, HuffPost, CNBC TV and Dainik Bhaskar among others.

Ashfaq ul Hassan, Editor of The Kashmir Monitor, termed Mudassir as a dependable journalist who covers all possible angles of a story. “His honest, enthusiastic and realistic approach is highly commendable,” Ashfaq noted.

Ishtiyaq Ahmad, Editor of Kashmir Indepth, also hailed Mudassir terming him an extremely intelligent journalist who has always strived to highlight issues of human rights, gender, social justice, environment and health. “A perfect team man who has his ear to the ground” was how Ishtiyaq summed him up.

The award has been instituted in the memory of G Shantha, an English teacher hailing from Thalavadi in Kerala’s Alappuzha district. Born in 1942, she dedicated her career to instilling in her young wards an unshakeable determination to chase their dreams wherever she taught, including at Seethalakshmi Ramaswami College, Trichy, Tamil Nadu, and Devasvom Board College, Thalayolaparambu, Kerala, and Mahatma High School for Girls, Chennithala, Kerala.

G Shanta passed away in 2007 at the age of 65. She worked selflessly to promote the English language among rural kids. She also found time to write short stories and poetry.

The award went to Jugal Purohit, a Senior Broadcast Journalist with BBC India, in 2018 and in 2019 M Nanjundaswamy, a Mysuru-based stringer of Kannada daily Vijay Karnataka, was the recipient.( KINS)

Jammu and Kashmir an integral part of India, won’t allow separate PM for the state: PM Modi in Kathua