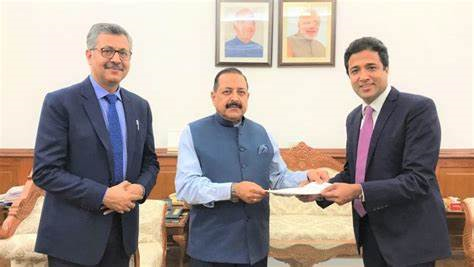 Describing PM Modi’s call for “Sabka Sath,Sabka Vishwas,Sabka Vikas, Sabka Prayas” as truly a visionary statement for collective effort by all Indians, Agarwal said, Indian Chamber of Commerce feels that next 10 years are going to be crucial for India to make a big economic leap and the contribution of the Indian Industry including young business leaders, Start-Ups, women entrepreneurs and agriculture entrepreneurs will be the key for our stated goals.

Dr Jitendra Singh recalled that Prime minister Narendra Modi had given a call for “Stand Up India, Start-Up India” right in the beginning of his first term and since then, the government has initiated a number of steps for capacity building and skill development of youngsters to find self-employment and at the same time, provide livelihood and employment to others as well.

The Minister said, Indian Chamber of Commerce, which was established in 1925, has a historic legacy right from the pre-independence era of having contributed to the promotion of Indian businesses and economic development. Now, when India is passing through its 75th year of independence, leading industry organisations have a critical role to play in facilitating, nurturing and shaping India’s economy when Independent India turns 100 in 2047, he said.

Referring to a number of path-breaking decisions taken by Prime Minister Narendra Modi, Dr Jitendra Singh mentioned the decision to hike the import duty on bamboo products and amendment in the Indian Forest Act to facilitate the young Start-Ups to use home grown bamboo for developing various bamboo products domestically, including Agarbatti, which were earlier being imported in large quantity from other countries.

The government headed by Prime Minister Narendra Modi has sought to bring in ease-of-business both at the level of reducing the avoidable regulations and procedural hassles as well as by promoting application of scientific technology in different sectors, whether it be agriculture, health, horticulture, etc. As a result, he said, in the last few years those of the Indian States where youth were traditionally dependent on government jobs have also started looking for other avenues because they find these avenues more attractive and also lucrative.

Dr Jitendra Singh suggested that instead of Start-Ups reaching us, we need to search and identify the Start-Ups with the right aptitude and potential, and promote them. In doing so, the industry can play a big part in supporting and owning young Start-Ups who can be trained and mentored with the future prospect of a lasting and sustainable means of livelihood.( KINS)