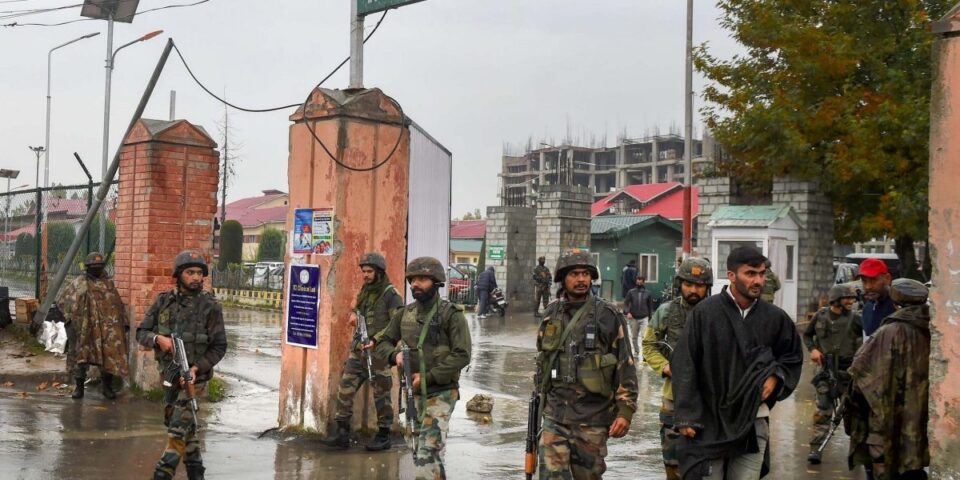 Srinagar, Nov 8 ( KINS): A policeman was shot dead by militants  in the Batamaloo area of the city on Sunday, officials said.

The cop, identified as constable Tausif Ahmad, was critically injured and taken to the SMHS hospital where doctors declared him brought dead, they said.

“At about 8 pm, militants fired upon Jammu and Kashmir Police constable Tausif Ahmad near his residence at S D Colony, Batamaloo,” an official said.

The area has been cordoned off, and a hunt has been launched to nab the attackers, they added.

Jammu and Kashmir Pradesh Congress Committee (JKPCC) president Ghulam Ahmad Mir termed the attack as shameful and mindless on the part of gunmen and said such incidents are highly condemnable and unacceptable in a civilied society.

“I am deeply saddened and shocked to learn about the killing of Touseef Ahmad,” Mir said and conveyed deepest condolences to the bereaved family and prayed for courage to the family members to bear the irreparable loss.

The JKPCC president expressed serious concern over the “deteriorating” security situation and termed the attacks on policemen and civilians as matter of grave concern.

He urged the government to take effective measures to deal with the situation to end the bloodshed.

In a tweet, the NC said: “Unequivocally condemn the cowardly & dastardly attack on 29-year-old policeman in Batmaloo, Srinagar in which he lost his life. No words of condemnation would be enough! May Allah grant him a place in Jannat. Our hearts go out to his family and friends at this time of grief, the NC said in a tweet.

The PDP tweeted: “Anguished by the attack in Batamaloo which has claimed the life of @JmuKmrPolice cop Tauseef Ahmed. May his family find strength to bear the loss.”

People’s Conference president Sajad Lone said he was pained to hear about the killing.( KINS)

NIA raid on Jamaat leaders a self goal, Mehbooba