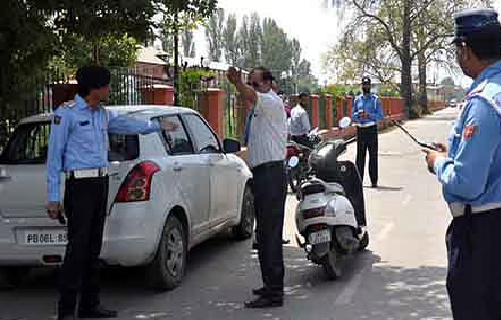 However, in contravention of guidelines, the heavy tourist vehicles are plying in all the routes of the Srinagar city.

There are already narrow roads in Srinagar, but allowing heavy vehicles is turning the situation from bad to worse and aggravating the traffic problems.

Several states in India have banned plying of heavy tourist buses on roads for the smooth movement of traffic.

A senior official of the Traffic Department said they are going to install the nakas at various places to intercept the heavy vehicles including tourist buses from entering Srinagar during day hours.

“There are already strict guidelines of the High Court, which ban movement of heavy vehicles during day hours. We are going to take strict measures to avoid such things. However, the tourists park their vehicles in several areas on the roads, including Boulevard, which houses scores of hotels, leading to disruption in traffic movement. But we are thinking over this issue seriously,” the official told news agency Kashmir Indepth News Service (KINS).

he Srinagar city has been witnessing chronic traffic jams due to plying of heavy vehicles during day hours.

People have been complaining that the absence of traffic persons for streamlining the traffic movement in the peak hours brings them immense inconvenience.

In the tourist hub Boulevard, tourists park their vehicles on the main roads leading to heavy traffic jams. “Locals and tourists park their buses illegally on the main road during the day hours leading to chronic traffic jams. Yesterday, I got stranded in a heavy traffic jam at Dalgate as there was no traffic person streamlining the traffic and I reached home late in the evening,” said Mohammad Aslam, a shopkeeper at the Boulevard. (KINS)